In a new white paper, Lockton assesses the risks Buddy the Elf encounters in his new environment and at the North Pole. 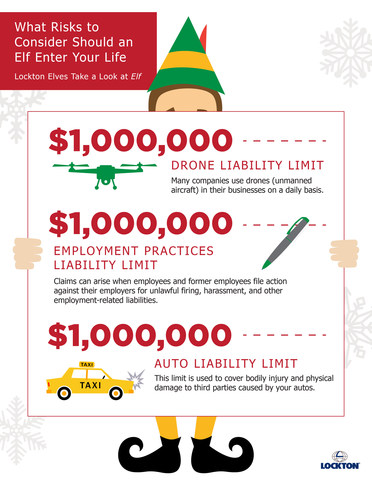 According to Lockton’s analysis of the movie “Elf” (2003), there are many lines of insurance that could come into play should a claim be filed.

In the movie, Buddy played by Will Farrell, is hit by a taxi while crossing the street. According to Lockton, he could have filed an auto liability claim had he been injured. The insurer couldn’t speculate as to whether the taxi driver was distracted at the time of the accident.

In the movie, Lockton noted that other elves had to work overtime to make up for Buddy’s insufficient productivity which could raise the risk of injury leading to a workers’ compensation claim.

Santa’s workshop has strict quality control measures in place, according to Lockton, thereby avoiding potential product liability claims as a result of unsafe or defective toys. If a toy would be subject to a product recall, Lockton states, “If triggered, Santa’s insurer would reimburse him for costs that include: notification, announcements, overtime to non-salaried employees, warehousing, hiring of consultants, and disposal. While it is important to have coverage for product recall expenses, it is critical for Santa to have a product recall program in place for situations like this. Having detailed instructions and procedures in place ahead of time makes conducting a successful recall all the more likely.”

Because Buddy is not like his Elfen peers and they mock him as a result, Lockton suggested that he may have grounds to file a harassment claim against Santa an North Pole Industries.

Because the typical delivery of toys system was out of commission, Santa had to resort to using drones resulting in the potential for drone physical damage claims.