There was, in hindsight, a clear element of risk to Tesla Motors Inc.’s decision to install Autopilot hardware in every car coming off the production line since October 2014. It paid a price, with federal regulators probing the deadly crash of a Model S while in driver-assist mode and critics slamming Tesla for rolling the technology out too soon. 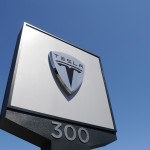 But there was also a reward. The company has collected more than 1.3 billion miles of data from Autopilot-equipped vehicles operating under diverse road and weather conditions around the world. And in the frantic race to roll out the first fully functional autonomous vehicle, that kind of mass, real-world intelligence can be invaluable. In that way, for now, the electric-car maker has a leg up on competitors including Google, General Motors Co. and Uber Technologies Inc.

“There’s no question that Tesla has an advantage,” said Nindhi Kalra, a senior information scientist at the Rand Corporation. “They can learn from a wider range of experiences and at a much faster rate than a company that is testing with trained drivers and employees behind the wheel.”

The big promise of autonomous motoring is that it’ll save lives, and a Rand report in April that Kalra co-authored warned that cars “would have to be driven hundreds of millions of miles and sometimes hundreds of billions of miles to demonstrate their safety.” Data is king; the more you have, the faster the algorithms will learn.

“Most car companies and tech companies don’t want to give away how far along they are.”

Of course, not all miles are created equal: there are semi-autonomous as well as fully self-driving ones, real-world vs. simulated, highway vs. those racked up in tricky urban environments. Still, Tesla is “in a very unique position to push the state of the art of algorithmic driving and machine learning in personal transport,” said Adam Jonas, the lead analyst at Morgan Stanley for autos and shared mobility, in a recent note to clients.

Uber, which has been piloting self-driving rideshare vehicles in Pittsburgh, recently deployed a fleet in San Francisco in its partnership with Volvo Cars. Each SUV is staffed with two employees, one ready to grab the wheel and the other on the lookout for pedestrians. (Uber made the move without approval from the California Department of Motor Vehicles, and state prosecutors have threatened to seek a court order to force the company to stop. An Uber executive said it’s acting “just like Tesla.”)

As for GM, it’ll be putting its flotilla on the streets in Michigan, now that Governor Rick Snyder has signed a law allowing public-road testing of cars without steering wheels, gas or brake pedals—or any need for human control. But GM engineers will be in the front seats, as they are in test-trips that have been taking place in Arizona and California. Ford Motor Co. has been doing its controlled runs on Michigan roads since 2015, including when it’s snowing.

In a Tesla car, when Autopilot is turned on, it’s able to do things like change lanes and parallel-park itself. Tesla stresses to owners that they’re in charge—and must always have hands on the wheel—but the company is effectively trying out evolving technology with people who may not fully comprehend they’re expected to maintain control or who may ignore Tesla’s instructions.

The fatal accident occurred in May when a man drove his 2015 Model S under the trailer of an 18-wheeler on a Florida highway. Neither the driver nor Autopilot noticed the white side of the tractor-trailer against a brightly lit sky, so the brake wasn’t applied, according to the company. The National Highway Traffic Safety Administration is investigating.

The 1.3 billion miles of data Tesla said it has collected represents those covered by its vehicles even when Autopilot isn’t switched on—it operates in “shadow mode,” with sensors tracking real-world data when it’s off. In May, a Tesla executive said at a Massachusetts Institute of Technology conference that the cars had driven 100 million miles with Autopilot actively engaged. In October, Musk said on Twitter that the number of cumulative Autopilot-on miles was 222 million.

“Whether they are ahead or not, Tesla certainly has tons of data,” said Richard Wallace, director of transportation systems analysis at the Center for Automotive Research in Ann Arbor, Michigan. “They will be able to analyze that six ways from Sunday and continue to tweak their algorithms.”

Musk said in October that the upcoming Model 3, due out in late 2017, as well as all Teslas now being made at the company’s Fremont, California, factory, will ship with an improved hardware suite that will enable total self-driving. While he’s said he wants to demonstrate an autonomous cross-country drive within a year, other automakers have generally ruled out total self-driving capability until sometime after 2020.

“Most car companies and tech companies don’t want to give away how far along they are. Elon, of course, is the exception—he’s always out there claiming how far ahead of everyone else he is,” said Karl Brauer, executive publisher for Kelley Blue Book. As companies boost their intelligence gathering, “the level of data that will be generated is on a scale that is hard for us to conceive. This is the tip of the iceberg.”‘