Nearly 1 in 10 homeowners reported that they had fallen victim to a theft from their garden with the average value of the items stolen hitting £176.00 (roughly $258), according to Allianz Insurance. 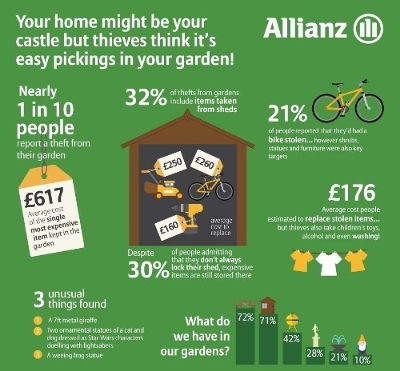 Some of the real riches can be found in the good old garden shed. The insurer found that 32 percent of thefts from gardens involve something being stolen from the shed with lawnmowers, garden equipment and general household tools making the list. But the bicycle is highly prized by thieves with 1 in 5 people who have experienced garden theft reporting a missing bicycle. The average price of a bicycle is around $367.

It’s easy to understand why gardens are so attractive to thieves with the rich pickings on offer:

But despite having such an expensive item in their back garden, 30 percent of people admitted that they don’t always lock their sheds.

Thieves don’t only swipe expensive items either, with children’s toys, alcohol and even laundry hanging on the line disappearing.

“Our research showed that May is one of the worst months for this type of theft which is exactly when people want to be out enjoying their gardens in the sunshine,” said Alan Gairns, product manager at Allianz.