The global economic losses from natural disasters like earthquakes, floods, droughts and cyclones and have continued rising to reach an average of $250 billion to $300 billion annually, according to a U.N. report released Wednesday.

The report, produced by the U.N. Office for Disaster Risk Reduction, estimates that an investment of $6 billion annually in measures to reduce the risk of disasters would save the world from losses of $360 billion over the next 15 years.

“The report is a wake-up call for countries to increase their commitment to invest in smart solutions to strengthen resilience to disasters,” said Margareta Wahlstrom, the U.N. special representative on disaster risk reduction.

She said this will be a key issue at the Third U.N. World Conference on Disaster Risk Reduction in Sendai, Japan, from March 14-18 where some 8,000 participants are expected including many world leaders.

“We are playing with fire,” he said of the report’s findings. “There is a very real possibility that disaster risk, fueled by climate change, will reach a tipping point beyond which the effort and resources necessary to reduce it will exceed the capacity of future generations.”

The staggering price tag from disasters affects the ability of governments to provide services, diverts money from critically needed infrastructure, and reduces peoples’ incomes and the number of jobs, he stressed. 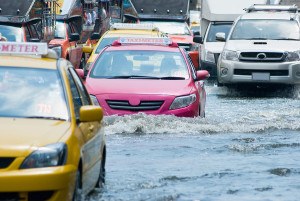 Ban told a U.N. event to launch the report that “the poorest are hit the hardest when disasters strike,” and low-income countries risk losing five times as many of their buildings as richer countries.

Andrew Maskrey, lead author of the 2015 Global Assessment Report on Disaster Risk Reduction, said the economic losses from natural disasters have “been rising continually over the last few decades.”

Maskrey said the U.N. is now using the same global risk technology that insurance companies use, and climate change is already included in the risk calculation.

The report said governments need to be setting aside $314 billion every year to meet annual average losses from just earthquakes, tsunamis, tropical cyclones and river flooding.

Maskrey said the United States is putting aside somewhere around $50 billion of that amount to cover for its future losses.

In small Caribbean island nations, he said, average annual losses associated with tropical cyclone winds alone are projected to increase by as much as $1.4 billion by 2050 “thanks to climate change.”

And Maskrey said climate change will make risks “go up in the future.”