Perhaps if Lindsey Vonn had a big cushy airbag to fall on when she tore two ligaments in her right knee she wouldn’t have missed the Sochi Olympics.

And maybe Aksel Lund Svindal wouldn’t have broken bones in his face and suffered a laceration to his groin and abdominal area after failing to land a massive jump in 2007.

Looking back, it’s nearly impossible to calculate what effect – if any – an air bag would have had in those crashes.

But with a radical airbag system being approved for use in World Cup and lower level races beginning in January, Alpine skiing could get a lot safer.

“History is what drives the future,” International Ski Federation (FIS) secretary general Sarah Lewis told The Associated Press on Tuesday after the approval was announced. “So the lessons learned from different crashes in the past are used as the basis to improve the situation in the future.”

The system – which entails putting an airbag in the neck area of athletes’ back protectors – was developed by Italian manufacturer Dainese in coordination with the FIS. It inflates when skiers lose control and are about to crash. 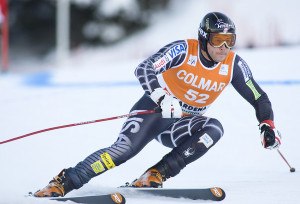 “Dainese has been closely aligned to it but there are other companies out there which are also developing their systems,” Lewis said.

Until December, the system can be worn in World Cup downhill training sessions.

Intended for speed disciplines, the system’s race debut will come at the women’s downhill in Bad Kleinkirchheim, Austria, on Jan. 10. Men will use it for the first time at the classic venue of Wengen, Switzerland, the following weekend.

While the system is not mandatory, the FIS hopes that all World Cup racers will use it.

The FIS had originally hoped to implement the system at the start of this season but there were concerns over the shape and aerodynamics of the back protectors, which hold a small gas generator capsule that inflates the airbags.

Dainese has been collecting information from skiers for five years to find out exactly when the system should go into effect – in other words, at what point in a fall can a racer no longer regain control.

A similar airbag system has been used in motorcycle racing since 2009.

“There will continue to be injuries but we want to try to work in a way to minimize these and still keep the sport attractive and exciting,” Lewis said.

Skiing has always been an injury-riddled sport but the worst crashes were particularly severe when the airbag system first came into development about five years ago.

In 2008, American downhiller Scott Macartney suffered brain injuries and was kept in an induced coma after losing control and smashing his head on the final jump of the treacherous Streif course in Kitzbuehel, Austria.

Also in 2008, Austria’s Matthias Lanzinger had his lower left leg amputated after crashing in Kvitfjell, Norway.

The next year, Daniel Albrecht of Switzerland suffered life-threatening brain and lung injuries after a crash in the same spot as Macartney in Kitzbuehel. And in 2011, Hans Grugger of Austria had yet another horrific crash and head injury in Kitzbuehel.

More recently, Vonn tore up her right knee during a crash at the world championships in Schladming, Austria, in February 2013.

“(The airbag system) is going to help (avoid) the most serious injuries,” Lewis said