On Everest, everybody knows that the Khumbu Icefall is dangerous. They’ve known it for generations, since the first great Everest mountaineer, George Mallory, turned away from the Icefall in 1921, insisting it was impossible to pass.

It is a river of ice, a kilometer (half mile) or so of constantly shifting glacier punctuated by deep crevasses and overhanging immensities of ice that can be as large as 10-story buildings. It can move two meters (six feet) in just one day. Crossing it can take 12 hours.

In the Khumbu Icefall, crevasses can open – or close – in less than a day. Ropes can be snapped by the moving ice, ladders broken. Looming glaciers – on the Icefall itself or on the Western ridge of Everest – can break off in a moment, setting off avalanches that send thousands of tons of ice down the mountain.

That is what happened last week when a piece of glacier sheared away from the mountain, setting off an avalanche of ice that killed 16 Sherpa guides as they ferried clients’ equipment up the mountain. It was the deadliest disaster in Everest climbing history.

“It’s always something we fear,” said Adrian Ballinger, a high-altitude mountaineering guide who has climbed Everest six times, and who is taking clients up the mountain again this year through the Icefall. “This didn’t surprise those of us who spend a lot of time on Everest,” he said. “We’ve been living on borrowed time.”

But climbers keep going there. Because if you want to get to the summit of Mount Everest, you probably need to go through the Khumbu Icefall.

The mountain’s geography means the Icefall is the only way to reach the comparatively easy South Col route up Everest, making it impossible to resist for plenty of people. 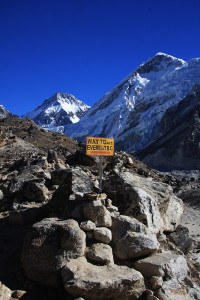 “Everest is an enormous draw,” said Stuart Macdonald, an international mountain guide and avalanche expert. “It pulls people in.”

Hundreds of people now pass through the Icefall every year, pushed along by a mountaineering machine designed to take wealthy amateurs to the summit, with climbing trips costing upwards of $75,000 per person.

“If it wasn’t the tallest mountain in the world, you would never put yourself on a glacier this active,” said Ballinger.

Safety in the Khumbu – at least relative safety – comes only with speed.

“We look up at these chunks of ice blocks, pray and then try to get out of the area as fast as we can,” said Nima Sherpa, 34, an experienced Everest guide from the tiny Himalayan community that has become famous for its high-altitude skills and endurance.

Nima Sherpa did not climb this season, and with the deaths of his friends and colleagues – the bodies of 13 guides have been found since the Friday avalanche, and three more are missing and presumed dead – he now says he’ll give up high-altitude climbing completely.

“It is not just the Sherpas, but the foreign climbers are also scared,” he said.

But not so scared they won’t go. And the more people there are, the slower the route through the Icefall, as the line of climbers backs up.

While top guides can cross the most dangerous sections of the Icefall in less than a half hour, beginners could take a few hours to go the same distance.

That means more time standing on shifting ground, and more time exposed to the seracs, the huge chunks of ice that can tumble down on climbers from above.

Most climbers have to make multiple passes through the Icefall, moving up and down the mountain as they acclimatize and prepare for their summit attempt. Sherpas can go more than two dozen times, carrying supplies and helping clients negotiate the maze of ice.

In terms of distance, it isn’t much at all, even following the back-and-forth climbing route up the glacier.

“We’re only talking about a couple of kilometers maximum,” said Macdonald. “As the crow flies, it’s just not far.”

But it is a trip that can terrify even hardened mountaineers. Jon Krakauer, a climber and writer, has described each pass through the Khumbu as “a little like playing a round of Russian roulette.”

Special teams of Sherpas, known as Icefall Doctors, fix ropes through what they hope to be the safest paths, and use aluminum ladders to bridge crevasses. But the Khumbu shifts so much that they need to go out every morning, before the climbers, to repair sections that have broken overnight and move the climbing route if need be.

But Icefall Doctors, fixed ropes and experienced guides don’t mean it is safe. Almost 30 climbers have died on the Icefall since 1963, most killed in avalanches or when they were crushed by falling seracs. Occasionally, things are so dangerous the guides turn away completely. In 2012, one of the best-known Everest guiding operations, Himalayan Experience, canceled its climb midway through the season, saying the Icefall was simply too dangerous.

Ballinger and Macdonald are both part of a new wave of Everest guiding, with teams planning approaches to reduce the time spent on the Icefall.

For up to eight weeks before Ballinger’s clients even arrive in Nepal, they sleep in enclosed “hypoxic tents,” simulating life at high altitudes by limiting their oxygen. Then, once they get to Nepal, they acclimatize further on mountains other than Everest, to avoid the Khumbu.

In the end, he says, his clients will make only two passes through the Icefall – once up to the summit and once down – and the team’s Sherpas will go between five and eight times. That is about one-third the number of trips that Sherpas make on normal climbs.

But, he warns everyone on his team, the risk is still there. “Every person has to make their own choice,” he said.