Hours before Typhoon Haiyan hit the Philippines, authorities had evacuated 800,000 people and sent them to sturdy evacuation centers — churches, schools and public buildings. But the brick-and-mortar structures were simply no match for the jet-force winds and massive walls of waves that swept away everything in their path.

By the time the storm ended five hours later Friday evening, some 10,000 people would be dead, washed away by the churning waters pouring in from Pacific Ocean’s inexhaustible supply. 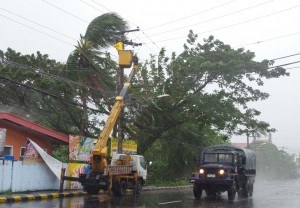 The Philippine tragedy was another reminder that nature’s fury is sometimes so immense that it can overwhelm even the most diligent preparations humans can mount. Combine that with a string of unfortunate circumstances – some man-made – and the result is a disaster of epic proportions that the country is now faced with.

“Sometimes, no matter how much and how carefully you prepare, the disaster is just too big,” saidáZhang Qiang, an expert on disaster mitigation at Beijing Normal University’s Institute for Social Development and Public Policy.

Authorities would have believed that they had responded well to the typhoon warnings by evacuating people living in flimsy homes along the coast to concrete structures inland. But they had not anticipated the 6-meter (20-feet) -high storm surges that swept through Tacloban, the capital of the worst-hit Leyte province, an island.

“I was talking to the people of Tacloban,” said Senior Presidential aide Rene Alemendras. “They said ‘we were ready for the wind. We were not ready for the water.”‘

“Someone was joking that we should have disaster preparation 101. We tried our very best to warn everybody … but it was really just overwhelming, especially the storm surge. It was really something,” she said.

Besides those who perished while sheltering in evacuation centers, many of the dead had stayed put in their homes, either for fear of letting their property fall prey to looters or because they underestimated the risk.

While the storm surges proved deadly, the initial destruction was caused by the winds blasting at 235 kilometers per hour (147 mph) that occasionally blew with speeds of up to 275 kph (170), howling like jet engines.

Lt. Col. Fermin Carangan, an air force commander in Leyte, said he was at his base in Tacloban, preparing for the storm with his men when the wind and water started coming in.

“It was 7.30 in the morning. The rain and wind were so strong and the water surged in fast and rose without letup. We had no time to move elsewhere, so we clambered up the room, about 10 of us,” he told The Associated Press.

“Then the roof started to peel off. One by one we were exposed to the rain and we were just holding to the roof wooden beams. Then the walls of the building started collapsing and each one of us started falling into the water. We were yelling at each other. Then all of us got separated,” said Carangan, 45.

The 25-year veteran of the air force managed to grab a wooden truss from the roof and clung to it for five hours while being buffeted by waves.

“The tide was coming from all over … I had no sense of direction,” he said. The waves eased after five hours and he paddled his makeshift lifeboat toward land in a neighboring province. Gashed, cut and bruised, he hit a coconut tree and noticed a boy about 7-year-old floating nearby on a piece of wood.

Carangan got hold of the boy and both finally made it to the nearby village. After handing over the boy to a policeman he walked to an army base.

The Philippines sees about 20 typhoons per year. Most strike the north along the main island of Luzon and the population in the central islands, where Leyte is located, is less aware of the potential for disaster.

The region is also blighted by its geography. It is made up of a string of islands, and there is only so much land where people can be evacuated to, unless they can be flown or ferried to the mainland.

The Philippines’ disaster preparation and relief capacities are also hampered by political factors. It lacks a strong central government and provincial governors have virtual autonomy in dealing with local problems.

Contrast this with Vietnam, which sees about a dozen typhoons per year. It is similarly poor and densely populated but a centralized Communist Party-led government broadcasts clear messages that cannot be ignored by provinces. Also, because of a clearly defined land mass unlike the archipelago of the Philippines it is easy to evacuate people deep inland.

“This is not the time to judge. … The national government and the local government all need to work together not to criticize anyone or not to show that one is better than the other,” said Alemendras, the presidential aide.

But even with adequate resources and a robust government authority, forces of nature and the unpredictability of people can put paid to even the best plans, as seen when Hurricane Katrina plowed into New Orleans in 2005.

More than 1,400 deaths were blamed on the massive storm and its aftermath, mainly among the 10-20 percent of the city’s population that was unable or unwilling to leave before it hit.

In Japan, meanwhile, the 2011 tsunami might have killed many more without in-place emergency response measures, but an inadequate response to the nuclear power station crisis that followed seriously compounded the disaster.

Because each crisis is different, management plans need to be flexible and adaptable to the changing situation, said Zhang, the disaster expert. Rather than specific pre-set directives, they work best as a list of options, Zhang said.

That, however, requires access to complete, up-to-date information, something authorities in the Philippines have in short supply. Many areas have been cut-off because of damage to roads and other infrastructure and staffing problems have interrupted the collection of basic data on what supplies are needed.

As the scale of the disaster became apparent on Sunday, Philippine President Benigno Aquino III said local governments hadn’t been able to provide the necessary data to coordinate relief, partly because rescue workers themselves had suffered from the storm and weren’t able to show up for work.

Aquino pledged that problems in preparedness and response would not go ignored.

(Associated Press reporters Jim Gomez in Tacloban and Oliver Teves in Manila contributed to this report.)

Davies Touts Technology as it Expands Claims Infrastructure in the U.S.

Lumber Buyers ‘Pay Up or Run Out’ Amid U.S. Homebuilding Surge