Hong Kong maintained its third- highest storm signal in the wake of Typhoon Usagi, which canceled hundreds of flights and stranded travelers before making landfall in southern China. The city’s financial markets, schools and offices may delay opening this morning. 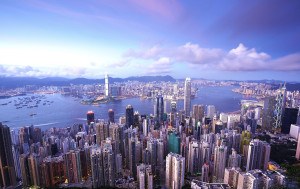 The Hong Kong Observatory repeated the No. 8 Storm Signal at 4 a.m. local time, meaning winds of at least 63 kilometers (39 miles) an hour are expected, while downgrading Usagi to a tropical cyclone.

Thousands of people were evacuated from coastal areas in Fujian province as storms knocked out power lines, while travelers celebrating the Mid-autumn Festival were delayed across the region with more than 440 flights affected at Hong Kong airport.

“It’s probably the worst weekend ever,” Jessica Coelho, a Hong Kong-based human resources executive who was stranded in Singapore, said by telephone yesterday. “It’s a nightmare trying to get back. Everyone is trying to get on a plane home.”

The storm, rated the world’s strongest typhoon this year, was about 160 kilometers northwest of Hong Kong and moving west- northwest at about 22 kilometers an hour, the weather bureau said at 6 a.m. today. The city recorded maximum sustained winds of 73 kilometers an hour. The Observatory will consider lowering the signal at or before 10 a.m. if local winds weaken below gale force, it said.

According to Hong Kong Exchanges and Clearing Ltd. rules, premarket trading will be canceled today should Signal 8 remain in force between 7 a.m. and 9 a.m., with morning trading to begin at least two hours after the warning is lowered. There will be no morning session if the alert is dropped after 9 a.m. and no trading for the day if it’s still up after noon.

Usagi made landfall in Shanwei city in China’s southern province of Guangdong at 7:40 p.m. local time yesterday, the provincial meteorological office said in a statement. It was expected to move northwest at a speed of about 20 kilometers an hour, and its strength will gradually weaken before it leaves Guangdong today as a tropical storm, it said. At least three people were killed by a fallen tree and broken window glass in the province last night, Xinhua News said.

Intercity rail services between Guangzhou, the capital of Guangdong, Zhuhai and Shenzhen have stopped, according to the official microblog of operator Guangzhou Railway (Group) Corp. Some bullet train services were canceled yesterday, with others also scrapped today, it said.

In Fujian province, Usagi-related storms knocked out three power lines early yesterday, cutting off electricity to about 170,000 households before it was restored to all but 25,000 by noon, Xinhua said. The province issued a yellow typhoon warning, the next to lowest on the country’s four-level scale, at 4 a.m. today before the China Meteorological Administration downgraded it at 6 a.m. to blue, the lowest level.

Thousands of people were evacuated from low-lying coastal areas in the province, Xinhua reported. The flood-control headquarters ordered reinforced patrols so that emergency repairs could be carried out to prevent embankment breaches.

Usagi dumped as much as 70 centimeters (28 inches) of rain in Taiwan’s east on Sept. 21, left 12 people injured and disrupted more than 100 flights, the Central Emergency Operation Center said.

While passing Taiwan, it had sustained wind speeds of 205 kilometers per hour, making it a super typhoon, according to a tracking map on the Hong Kong Observatory website.

In the Philippines, flooding forced 242 people in the north of the country to flee their homes for temporary shelters on Sept. 18, the country’s disaster agency said.

“Rain bands of Usagi are now affecting Hong Kong and have brought over 70 millimeters of rainfall over parts of the territory,” the city’s observatory said in its latest bulletin.

The government opened temporary shelters, with 274 people seeking refuge, while it received 69 reports of fallen trees. As of 3 a.m., 13 people had sought emergency medical treatment at the city’s hospitals, with six of them discharged, the Hospital Authority said.

Grocery shelves were almost empty yesterday at a Tuen Mun ParknShop store in Hong Kong, with only a few packs of instant noodles left and most vegetables sold out.

“The supermarket is so packed,” Fanny Wong, 54, a housewife who bought six packs of instant noodles, two cans of luncheon meat and some eggs, said at the store in the district’s Pierhead Garden. “People are just stocking up everything, from instant noodles, bread to ingredients for hotpot such as mushrooms, pak choi and other vegetables. It took me about half an hour to check out.”

Hong Kong, situated off China’s southern coast, gets on average about six tropical cyclones annually, according to the weather bureau. Usagi is the most powerful storm to threaten Hong Kong since Severe Typhoon Utor in August.

A severe typhoon, one grade lower than a super typhoon, is equivalent to a Category 2 hurricane on the Saffir-Simpson scale, meaning “extremely dangerous winds will cause extensive damage,” according to the U.S. National Hurricane Center website.

“I came to Hong Kong for work last week and spent my weekend here,” Jay Johnson, a U.S.-based businessman, said yesterday. “It was a lovely stay but now it’s such a headache getting out. I need to be in Munich for a business meeting on Monday, but now I may need to cancel it.”