Add cruise control and speed limiters to the growing list of technological conveniences that cut both ways on the road. 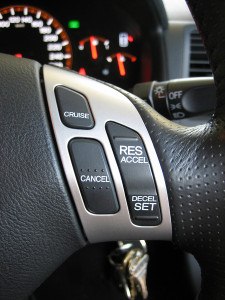 New details from a French study show that using cruise control – and to a lesser degree limiters on speed – is a major contributor to drowsiness and adds significantly to reaction times when traffic gets heavy or road conditions deteriorate.

Details of the study funded by the Vinci Autoroutes Foundation were released this week. It involved 90 French drivers, divided into three age groups and put through a driving simulator for three days. All the drivers showed drowsiness and slowed reaction times using cruise control and speed limiters, but the youngest drivers – ages 18 to 30 – were most affected by fatigue, the study found.

In the study, drivers were hooked up to machines measuring brain activity and eye movements and drove 120 kilometers (75 miles) in a simulator three times, encountering construction, a radar, a bus accident and a toll booth.

With cruise control – where a car automatically keeps on at the same speed until the brake is applied – drivers braked progressively later, until by the end of the simulated trip drivers hit the brakes 85 meters (yards) further on.

The study asked participants to report their level of vigilance every 15 minutes, and average levels decreased significantly after just 30 minutes from the self-reported “rather awake” to the rather alarming “neither awake nor asleep” – notably more for the younger drivers using cruise control. Simultaneous measurements of brain activity and eye movement showed similar “zoning out” – with both slowing down as drivers relaxed their guard.

Kevin Clinton, head of road safety for Britain’s Royal Society for the Prevention of Accidents, said the research bears out an increasingly common human failing at the wheel.

“Vehicle technology is developing rapidly and vehicles are taking actions that previously the driver would have done,” Clinton said. “Drivers can be underloaded as well as overloaded.”

For cruise control, monotony is what slows reaction time – drivers zone out and are slower to recognize danger ahead, said Andre Dufour, the researcher with the University of Strasbourg who carried out the study.

He said he didn’t advise against the use of cruise control and speed limiters, but the young – who are more prone to drowsiness and are generally less experienced – need to be especially careful.

“They help people to obey the speed limit. But you have to know how to use them,” he said.

Clinton, who was not involved in the study, said education will be key as cars become more automated “so that drivers understand what the technology does and doesn’t do.”

“The person is still in charge and still responsible,” he said.