Long before the Costa Concordia capsized in Italy, salvagers fished out ships from the depths of the ocean with bold and innovative feats of engineering. Here are some of the most improbable salvage operations in maritime history:

At the end of World War I, Germany scuttled its High Seas Fleet to prevent it from falling into British hands. Stunned British sailors watched dozens of German warships sink at the Royal Navy’s Scapa Flow base in Orkney, where they had been interned.

The British navy didn’t want to raise them, but a scrap-metal dealer named Ernest Cox set in motion the biggest salvage operation in history. More than 30 ships were raised in the 1920s and ’30s, including the 30,000-ton battle-cruiser Hindenburg. Cox refloated many ships by patching them up to make them air-tight and then pumping air into the wrecks so that they would surface – a method still in use today.

Eighteen U.S. warships were sunk or severely damaged in the Japanese attack on Pearl Harbor on Dec. 7, 1941. Yet only the Arizona, the Utah and the Oklahoma were unable to return to action before World War II ended. Other ships were repaired after a massive salvage operation.

The capsized Oklahoma was righted and refloated with the same method used in Italy for the Costa Concordia. The Arizona and the Utah still rest where they sank and serve as memorials for the crew members entombed in their wreckage.

Salvage expert John Roen pulled off a remarkable feat in 1944 when he raised the steel ore carrier George M. Humphrey, the largest boat to sink in the Great Lakes. Not only did he salvage and repair the ship – he recovered and sold 11,000 tons of ore it was carrying when it collided with another ship and sank to a depth of 77 feet (23 meters) in the Straits of Makinac.

Two large barges lifted the Humphrey out of a shipping lane and into shallower water. The ship was then patched, refloated and towed across Lake Michigan to Roen’s yards at Sturgeon Bay, Wisconsin, for repairs. 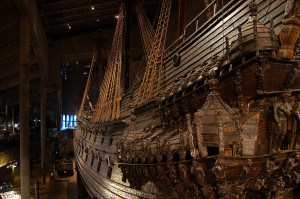 The top-heavy crown jewel of the Swedish navy sank on its maiden voyage in 1628. More than three centuries later, the hull was raised from a depth of 105 feet (32 meters) in the Stockholm harbor, nearly intact.

Using steel cables drawn through tunnels in the seafloor, the wreck was pulled to the surface in a series of delicate lifts over two years. The Vasa is now housed in a museum in Stockholm where some 1 million visitors a year admire its intricate wooden sculptures.

In 1974, the CIA recovered parts of a nuclear-armed Soviet submarine in a clandestine salvage operation that it refused to confirm for more than 30 years.

K-129 was carrying three ballistic missiles armed with nuclear warheads when it sank in 1968, 1,560 miles (2,510 kilometers) northwest of Hawaii with all hands lost. The CIA readied a salvage ship and winching system to lift the submarine from a staggering depth of 3 miles (5 kilometers).

The mission was disguised as a deep-sea mining expedition. In 2010 the CIA declassified an internal account of the mission but with many details taken out. It remains unclear exactly what parts of the sub were retrieved and what intelligence was derived from them.

On Aug. 12, 2000, the Russian submarine Kursk was rocked by explosions and sank to the bottom of the Barents Sea, killing all 118 seamen aboard.

In an unprecedented effort that cost the Russian government about $65 million, the salvagers cut away the sub’s bow, which was wrecked by the explosions, before lifting the 9,000-ton wreck to a transportation platform. It was then shipped to a dry dock in the Russian Arctic port of Murmansk.