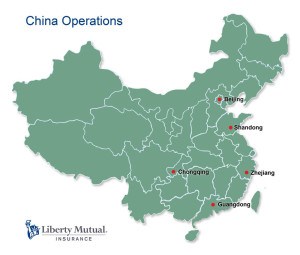 Headquartered in Chongqing, LICL received CIRC approval in August 2012 to prepare for a provincial branch in Jinan, the capital of Shandong Province, which is the fourth largest property/casualty insurance market in China.

Liberty Mutual is the second foreign property and casualty insurer in the province, and will offer personal lines products for Shandong’s 96 million people as well as a wide range of commercial lines products for small-to-medium enterprises. Shandong has a gross domestic product (GDP) of $794billion, making it China’s third largest provincial economy.

As of December 2012, Liberty Mutual is the second largest foreign non-life company in China and has five operations in the country: Chongqing in the west, Beijing in the north, Zhejiang in the east, Guangdong in the south, and Shandong in the northeast.

“Liberty Mutual’s strategy of seeking out markets in China that are largely untapped by the foreign property and casualty insurance market continues to meet with success,” said Liberty Mutual Insurance Group’s Chairman and CEO David H. Long. “CIRC’s approval of our Shandong branch reinforces our reputation as a strong company committed to providing quality insurance in China.”

Liberty Mutual has had a presence in China since 1996 when it opened a representative office in Shanghai. In January 2004, the company received approval to open its first insurance office in Chongqing, positioning Liberty Mutual as the first foreign property and casualty insurer with a presence in western China. In September 2007, Liberty Mutual received approval to have its Chongqing operation converted to a wholly owned subsidiary, which it named Liberty Insurance Company Limited. LICL is the only Fortune 500 company subsidiary headquartered in Chongqing.

Over the past decade, the international business unit has had a compound annual growth rate of 16 percent and, in 2012, contributed $5.7 billion net written premium, or 17 percent, of the company’s $33.55 billion in net written premium for the year. The International business unit provides insurance products and services through local country operations in three geographic regions – Latin America, Europe and Asia – and 11 of its 19 companies rank in the top ten in their market.