Russia imposed a ban on all new building in Sochi on Wednesday to fight the illegal construction of apartments and hotels in the city preparing to hold the 2014 Winter Olympics. 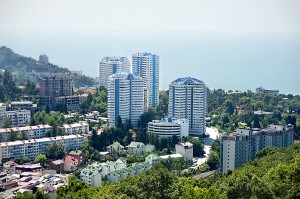 The governor of the Krasnodar region, which includes Sochi, said the ban was necessary because more than 800 buildings had gone up illegally in recent years. Courts have been asked to rule on whether they should be torn down.

State television showed bulldozers destroying one residential building and pointed to the shoddy construction of others that made them dangerous to live in.

Gov. Alexander Tkachyov said during a televised meeting with security officials that illegal construction has long “infected” resort cities along the Black Sea coast, but “the scale of this disease in Sochi is simply astonishing.”

Almost all of the Olympic venues and hotels in Sochi are being built from scratch, and demand for housing is high.

Tkachyov said anybody responsible for the illegal construction would be punished, including those in law enforcement agencies who provided them with protection.

“The root of this evil is not only the colossal profitability of the illegal construction, but the total impunity for those who have been engaged in this criminal business,” the governor said.