It was supposed to be a thrilling ride down a ski slope inside a giant inflatable ball that is to be one of the symbols of next year’s Winter Olympics; it ended in tragedy for the two Russian men inside.

The transparent plastic ball – known as a zorb – veered off course and sailed over a rock ledge in the rugged Caucasus Mountains of southern Russia. The ball picked up speed as it flew down the steep slope, rolling and bouncing. One man was killed and the other badly injured.

The man who died, 27-year-old Denis Burakov, was with friends at the Dombai ski resort, where they frequently went snowboarding, on Jan. 3 when he decided to take a ride in a zorb being operated next to a beginners’ slope. His friend Vladimir Shcherbakov joined him.

An eight-minute video taken on Burakov’s phone by one of his friends shows the two men being fitted into harnesses inside the zorb, which consists of two polyurethane balls with a layer of air between them. The zorb is then released to roll down the hill, the two men spinning inside.

But the zorb bounces off of the intended path, and a man waiting for it at the bottom of the hill tries in vain to catch the ball before it pops over a rocky ledge and disappears down a gorge below Mount Mussa-Achitara.

The person filming the video is heard swearing and asking “What’s down there?” The answer from someone off camera: “It’s a catastrophe down there.”

The Emergencies Ministry said both men were ejected from the zorb as it tumbled and they landed on the snow about 10 meters (30 feet) apart after having rolled about 1.5 kilometers (a mile). Still conscious and able to stand, they were rescued by two skiers, who then pulled both men up to the top of the hill. Burakov suffered serious spinal injuries and died on the way to the hospital. Shcherbakov suffered a concussion and other injuries and remains hospitalized.

The accident prompted the emergencies minister to demand on Wednesday that Russia address its lax enforcement of safety rules for winter sports, citing a series of accidents over the January holidays. Vladimir Puchkov said during a televised meeting with officials in charge of rescue services across the country that they should take extra measures to ensure safety, in particular at Russia’s ski slopes.

Sergei Loginov, deputy director of Z-orb.ru, the largest supplier of zorbs in Russia, said the zorbing run that killed Burakov was in violation of all safety rules. Zorbing requires a groomed gentle slope with fences on both sides of the track and a secure spot at the bottom where the ball can be safely brought to rest, he said, but none of this was present at Dombai.

“It’s not even irresponsibility. It’s an experiment on life,” Loginov said. “It’s all or nothing. They either survive or they don’t.” 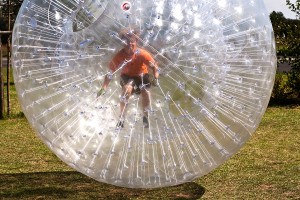 The sport of zorbing originated in the 1990s in New Zealand and is now done around the world, most often on grassy slopes. Loginov said there are several zorbing spots on the outskirts of Moscow and dozens more around the country.

Zorbs have been adopted as a symbol of the 2014 Winter Olympics, which Russia is holding in Sochi.

“The transparency of zorbs also reflect the open, accessible and inclusive society that Sochi 2014 Games is helping to build,” Dmitry Chernyshenko, head of the organizing committee, said in 2010.

Sochi’s modern ski resorts also are in the Caucasus Mountains. Dombai and other less-developed resorts are located to the east in the North Caucasus region, a patchwork of mainly Muslim republics suffering from poverty and unrest stemming from an Islamic insurgency.

“Until 2006, hundreds of people died every year at the North Caucasus ski resorts,” said Kantemir Davydov, an Emergencies Ministry spokesman in southern Russia. “That number has fallen sharply, but still on average 20 to 30 tourists die every year. The causes of the deaths are various, but the root is the same: There is no clear system assuring tourism safety.”

Federal investigators said they were inspecting the Dombai resort and attempting to determine who was responsible for the fatal zorb ride.

Russian state television suggested that one reason winter sports in Russia so often take lives is that people too often ignore basic safety rules. Its report showed families sledding on a slope near Moscow that was clearly marked “no sledding” and said six people had been hospitalized Tuesday with injuries, including concussions and broken bones.

In Italy, a snowmobile driven by a Russian citizen crashed into a ravine during a nighttime outing on a steep ski slope last week, killing six Russians being pulled behind the vehicle on a sled. Italian police arrested the driver on Wednesday.

(Sergei Venyavsky in Rostov-on-Don, Russia, contributed to this report.)