Cuba’s second city is still struggling to recover from the effects of Hurricane Sandy even as streetlamps in hard-hit lower Manhattan shine brightly and its subways begin rumbling through tunnels again. 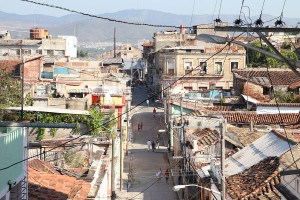 Two weeks after the storm blasted through Santiago, Cuba, the electrical grid has been restored to just 28 percent of normal as workers labor around the clock to replace power lines downed by thousands of fallen trees, the Cuban news agency Prensa Latina reported Monday.

“Sources in (state-run power company) Empresa Electrica emphasized that the task is titanic since it means building practically all of the secondary networks from the ground up,” the agency said, and those are the ones “that deliver energy to homes and were the most impaired.”

Much of the storm debris has been cleared from the streets, and students went back to classes there Monday in a sign of some return to normalcy for the city of about 500,000 people.

Residents said stores are offering early sales of basic foods that had been planned for distribution later in the year. People unable to cook in their darkened homes are relying on canned food, and the lucky few who have power are giving neighbors a hand by boiling their water or letting them charge cellphones.

“Things have been getting better, but we still don’t have electricity. Near my house there are streets that do … I’m anxiously awaiting it,” Berta Serguera, 82, told The Associated Press by phone from Santiago.

“The situation is very tough,” said her sister Mirta Serguera, 79.

Sandy hit southeastern Cuba on Oct. 25 as a Category 2 hurricane, killing 11 people, damaging more than 200,000 homes and causing major losses to coffee and other crops. Authorities have not yet given an estimate of the total economic toll.

Some 895 schools in Santiago were also damaged, according to a report by Communist Party newspaper Granma.

Many were repaired and functioning again Monday, but 129 were badly damaged, leaving students to gather in private homes, libraries, cultural centers and movie theaters, or be sent to other schools.

Some classes were also held in homes in neighboring Holguin province, Granma said.

In Santiago, hospitals, fire and water stations, bakeries and tall buildings were receiving priority power service, and electrical grid repairs were expected to finish by Nov. 15 with the help of crews drafted from across the country.

President Raul Castro remained in the city on his tour of the hardest-hit zones and promised to personally ensure that recovery efforts proceed apace.

“We all know the problems you have. Do not lose faith in the revolution,” Castro said in remarks broadcast on television over the weekend. “I will remain here until the electricity returns.”

Yolanda Tabio, a 67-year-old resident of central Santiago, said that after 12 days in the dark, she’s hopeful the lights will come back on soon. Her gas was restored three days ago, though phone service is still intermittent.

“The most important thing is to be able to boil water, because it comes out really cloudy and you have to take measures to avoid disease,” Tabio said.

John Ging, the operations chief for the U.N. humanitarian office, told a news conference Monday that the agency is mobilizing efforts to help both Cuba and Haiti.

Ging said in Haiti 27,000 homes have been destroyed, crops have been damaged, 50 people have died and “hundreds of thousands are now going to depend on our assistance.”

“Cuba is also badly affected,” he said.”2,000 schools there are damaged … and we estimate now 500,000 people in need of assistance, food and other items, so again we are mobilizing response on both of those countries.”

(Associated Press writers Peter Orsi in Havana and Edith M. Lederer at the United Nations contributed to this report.)