While wave watching is a favorite pastime of beachgoers, few notice what is happening in the shallowest water. A closer look by two University of Colorado Boulder applied mathematicians has led to the discovery of interacting X- and Y-shaped ocean waves that may help explain why some tsunamis are able to wreak so much havoc. 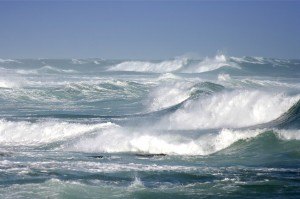 Professor Mark Ablowitz and doctoral student Douglas Baldwin repeatedly observed such wave interactions in ankle-deep water at both Nuevo Vallarta, Mexico, and Venice Beach, Calif., in the Pacific Ocean — interactions that were thought to be very rare but which actually happen every day near low tide. There they saw single, straight waves interacting with each other to form X- and Y-shaped waves as well as more complex wave structures, all predicted by mathematical equations, said Ablowitz.

When most ocean waves collide, the “interaction height” is the sum of the incoming wave heights, said Baldwin. “But the wave heights that we saw from such interactions were much taller, indicating that they are what we call nonlinear,” he said.

Satellite observations of the 2011 tsunami generated by the devastating earthquake that struck Japan indicate there was an X-shaped wave created by the merger of two large waves. “This significantly increased the destructive power of the event,” said Ablowitz. “If the interaction had happened at a much greater distance from shore, the devastation could have been even worse as the amplitude could have been even larger. Not every tsunami is strengthened by interacting waves, but when they do intersect there can be a powerful multiplier because of the nonlinearity.”

Ablowitz first observed the nonlinear wave action in 2009 while visiting Nuevo Vallarta just north of Puerto Vallarta with his family. He took hundreds of photographs and videos of the peculiar waves over the next several years.

“Unlike most new physics, you can see these interactions without expensive equipment or years of training,” said Ablowitz. “A person just needs to go to a flat beach, preferably near a jetty, within a few hours of low tide and know what to look for.”

A paper on the subject by Ablowitz and Baldwin was published this month in the journal Physical Review E.

Baldwin, who is studying under Ablowitz, wanted to go the extra mile to verify that the wave interactions observed by his professor were not unique to one beach. In this case he drove more than 1,000 miles to the Los Angeles area “on a whim” to search for the types of waves Ablowitz had observed in Mexico. He hit the jackpot at Venice Beach.

“I don’t think there is anything more enjoyable in science than discovering something by chance, predicting something you haven’t seen, and then actually seeing what you predicted,” said Baldwin.Source: University of Colorado Boulder