A squadron of U.S. F-16 fighter jets in Japan has been grounded for safety checks after one of their aircraft crashed in the Pacific, military officials said Thursday.

The crash comes as an uproar in Japan has been raised over the deployment of the U.S. Marine Corps’ latest transport plane, the MV-22 Osprey, to the southern island of Okinawa. Two Ospreys have crashed since April and swelling opposition to their deployment has become a major political headache for Tokyo and Washington. 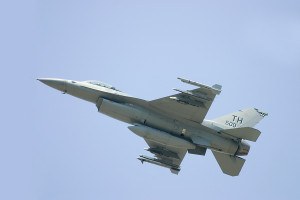 The F-16 with the 35th Fighter Squadron at Misawa Air Base crashed Sunday about 250 miles (400 kilometers) off the coast of Hokkaido, Japan’s northernmost main island. It was the first crash of an F-16 out of Misawa since 2002.

Staff Sgt. Nathan Lipscomb said the 45 F-16s at Misawa, which is the northernmost U.S. air base in Japan, have been grounded pending safety checks. He said an investigation into the cause of the crash was under way. The aircraft was en route to Alaska when it went down Sunday morning.

The pilot, whose name has not been released, ejected safely and was retrieved after about six hours by a Japanese and U.S. rescue mission. Lipscomb said the pilot is in stable condition and has been taken to a U.S. facility – reportedly in Alaska – but will return to Misawa. He could not immediately provide further details.

The United States has about 50,000 troops stationed throughout Japan under a mutual security pact.

Though Misawa is relatively remote and F-16 crashes rare, concerns over accidents, noise and base-related crimes are endemic in many areas that host the U.S. troops.

Such concerns are especially sensitive on Okinawa, which is home to most of the troops, and the outcry over the Osprey deployment has focused national attention on the potential dangers of U.S. military aircraft.

To help ease the uproar, U.S. and Japanese officials met in Tokyo on Thursday to discuss ways to assure the safe operation of the Ospreys in this country. The first 12 Ospreys arrived earlier this week for assembly in the city of Iwakuni and are to be deployed to Okinawa soon, though local officials have strongly criticized the plan.