“People like us who buy Ferraris don’t care too much about insurance because we buy cars for speeding,” said Li, in his twenties and the son of a Pearl River Delta factory owner, as he took delivery of a new 5 million yuan ($787,500) 458 Spider, his fourth red Ferrari. “If we crash, we just throw them away.”

Drivers like Li, who gave only his family name, illustrate the challenges that big global insurers such as Allianz , AXA and Chartis face as they move further into China under new rules allowing foreign firms to offer a full range of insurance products in the world’s largest car market.

While the opportunities are vast in China’s estimated $50 billion auto insurance industry, there are roadblocks aplenty – from poor driving standards to a new generation of car owners unfamiliar with the concept of buying protection against accidents and repairs.

“You can get lost in the attractiveness of the market because of the size, but there are a lot of challenges,” said Kevin Goulding, China CEO of Chartis, part of American International Group, who said his company was methodical in its approach in China. “We have no intention of making a big splash.”

As it stands, the 21 foreign insurers selling non-life products in China control just 1.1 percent of the market. Auto insurance accounts for three-quarters of non-life insurance premiums.

One of the main reasons foreign insurers’ market share is so small is the limits China imposes on their growth. Foreign insurers must apply to open new branches, and approval for each branch can take 12-18 months.

The policy has left foreign insurers with networks far smaller than those of state-backed rivals PICC and CPIC, and Ping An, part-owned by HSBC. The small networks could be a problem for insurers trying to cover cars, which can travel long distances.

Takaaki Tamai, senior managing director at Tokio Marine , said his company has concerns about not being able to grow its service network quickly enough to meet customer demand. Those concerns are reinforced by David Chen, who lives in Shenzhen and owns an Audi. His priority for car insurance is fast service – he said he expects a representative at the site of an accident within 30 minutes and reimbursement for repairs within a week.

As well as having a big enough geographic footprint to win and keep customers, foreign insurers have to figure out just which customers to target. Except for a pilot program with a handful of Chinese insurers, the government sets the rates insurers can charge, so profitability is tied to which customers an insurer covers rather than how it prices its policies.

Double-digit growth in the number of new drivers – thousands pass their driving test each day across the world’s most populous country – promises hefty premium volumes.

“The motor insurance business is booming,” said Liberty Mutual China CEO Jackson Tang. “The number of middle and high income people in China is increasing rapidly and these people will buy a car even before they buy a residential property.”

However, the vast number of people passing China’s famously quirky driver’s test – one question asks where a driver should aim when he needs to spit – is no reason for confidence among insurance executives hoping for fewer crashes, and fewer payouts. 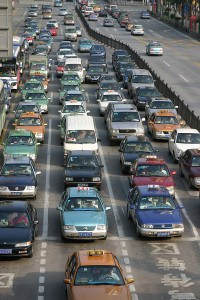 In 2010 alone, China reported 3.9 million road accidents that killed 65,225 people and injured 254,075. For comparison, there were 30,797 fatal crashes in the United States in 2009, according to the National Highway Traffic Safety Administration. The United States has almost 2.5 times as many registered vehicles as China.

The grim reality of so many new drivers hitting the roads meant a fatal road accident every 5 minutes somewhere in China, according to a World Health Organization website last updated by its China office in 2006.

Driving backwards on a highway is not uncommon, deliberate accidents are frequent, and dealers often tack repair shops onto showrooms to profit from the frequent dings and dents their customers suffer.

“Historically, young drivers tend to be a bad risk, but what we’ve got here is everybody is a young driver equivalent,” said Chartis’ Asia-Pacific consumer head John McPhee, noting foreign insurers are setting up teams and hiring consultants to study which drivers will be more profitable to insure.

There are national databases cataloguing driver behaviour but they are not up-to-date, said KPMG’s Hong Kong insurance practice head Sam Evans. “One of the big issues is data quality,” he said. “There are centralized databases collecting claims statistics, but they’re not updated very regularly so people will potentially take a policy out with one insurer, claim under that, then the next year switch to a new insurer and the system doesn’t necessarily pick up that they’ve made a claim in the prior year.”

Foreign insurers don’t have a good grasp on what data is available and are struggling to take data from other markets and apply it to China, said Johnny Chen, CEO of Zurich Financial’s general insurance business in Asia Pacific. “There’s really nothing we can take from European or North American or other Asian markets to draw any claims benchmarks,” he said.

Five years ago, about 1,100 new cars and other vehicles hit the streets of Beijing every day and, three years ago, China overtook the United States as the world’s biggest new car market. Consultancy LMC Automotive predicts new car sales will grow at 7-15 percent a year for the next five years. China has a population of 1.3 billion and only 106 million cars on the road.

Foreign insurance executives say Chinese consumers are becoming more comfortable buying insurance online, and point to Ping An’s success with tele-sales as a possible roadmap for how they might overcome their own geographic limitations.

Ping An earned 41.6 percent of its auto insurance premiums from cross-selling and tele-sales in 2010, the most recent full-year data available.

“What we expect to be doing is very much technology-driven. As an organization we can’t replicate the massive agency businesses of PICC and Ping An,” said Chartis’ McPhee.

Apart from Li and his sleek new Ferrari, foreign insurance executives say they can steer clear of some of the bigger claims by targeting people who buy expensive cars – who will pay more for insurance and are likely to be more experienced drivers.

The plan for attracting these high-value customers centres on service. Jack Yuan, deputy head of AXA’s general insurance operations in China, said AXA may offer concierge services as part of its auto insurance package, and could tailor-make packages to add other high-end products such as international medical insurance, fine art insurance and yacht insurance.

“We could provide privilege services like bookings at famous restaurants, concert tickets, pet boarding,” he said.