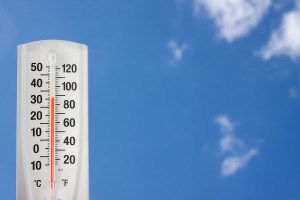 The National Oceanic and Atmospheric Administration’s National Climatic Data Center calculated that April’s average temperature of 57.9 degrees (14.4 degrees Celsius) was nearly 1.2 degrees (0.7 degrees Celsius) above the 20th Century normal. Two years ago was the hottest April since recordkeeping started in 1880.

Last month was the third hottest April in the United States and unusually warm in Russia, but cooler than normal in parts of western Europe. This is despite a now ended La Nina which generally lowers global temperatures.

Temperatures that would have once been considered unusually hot and record breaking now are not even in the top two or three, said Michael Oppenheimer, a Princeton University climate scientist.

The last time the globe had a month that averaged below the 20th Century normal was February 1985. April makes it 326 months in a row. Nearly half the population of the world has never seen a month that was cooler than normal, according to United Nations data.

“A warmer world is the new normal,” Oppenheimer said. “To me, it’s startling to think that a generation has grown up with global warming defining their world.”

The first four months of 2012 only rank the 15th warmest on record.