Eight Indonesian maids have fallen to their deaths from high-rise apartments in Singapore this year, and the Indonesia Embassy said Tuesday it is pushing for a ban on cleaning outside windows. 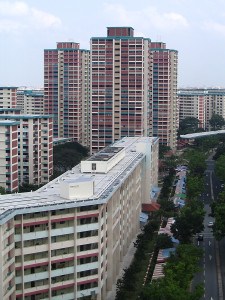 Indonesia, which supplies about half of Singapore’s 200,000 maids, has asked employment agencies to include a clause in work contracts that prohibits maids from cleaning the outside of windows or hanging laundry from high-rise apartments, Indonesian Embassy Counsellor Sukmo Yuwono told the Associated Press.

“It’s upsetting. These are human beings dying for nothing,” Yuwono said.

Singapore is under pressure to improve the working conditions of foreign maids, who live full-time in one in five households in the city-state of 5.2 million people. In March, the government pledged to mandate at least one day off a week for maids starting next year.

Last week, a court fined an employer 5,000 Singapore dollars ($4,000) and barred her from hiring domestic workers in the future after a maid fell and died from her fifth-floor apartment last year while cleaning windows standing on a stool.

Eight maids, all Indonesian, have died after falling out of windows while working this year, five of whom were cleaning windows, Singapore’s Manpower Ministry said. Four maids fell to their deaths in 2011.

“When you are used to a very simple life in the village, (there’s) no such thing as a high-rise building,” said Mareyeami, an Indonesian who has been a maid in Singapore for six years. “Maybe they don’t know how to clean the windows safely, so they will just try their best.”

The Indonesian Embassy helped at least one maid return to Indonesia after her employer insisted she climb out on a ledge to clean windows, he said.

“She was so scared,” Yuwono said. “But at least she is alive. I have to call the families of the maids who die. It’s very hard.”

Many Singaporeans who hire maids would likely resist a ban on chores such as cleaning windows or hanging laundry, said Theresa Low, who has employed Indonesian maids for 10 years.

“Singaporeans want to get their money’s worth,” Low said. “They really do work the maids very hard. Singaporeans don’t value them, don’t treasure them as much as they should. It’s a tragic thing. That’s somebody’s daughter.”

Maids from Indonesia are often eager to please the employer and may not speak up when a task is dangerous, Low said.

“Sometimes they know something is dangerous, but they do it because they want to work hard,” said Kartinah Yawikarta, a maid from Indonesia who has worked in Singapore for nine years. “We come here for money. But I always tell the other maids, it’s better to go home with no money than to die.”