Cabbage sellers in China have been caught spritzing their product with formaldehyde to keep it fresh during long trips to market in the country’s latest food safety scandal.

China’s food industry and regulatory agencies have been scrambling to clean up their reputations following a series of serious problems including melamine-tainted milk and pork laced with a banned growth promoter.

The official Xinhua News Agency said Monday dozens of wholesale vegetable dealers in Shandong province’s Qingzhou city were caught selling cabbage sprayed with formaldehyde. It didn’t say if the dealers had been arrested and what penalties they might face. 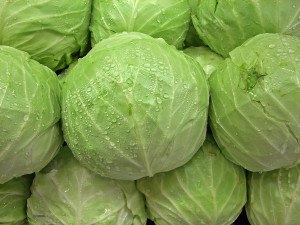 Cabbage is a staple food in China, most commonly used as a filling in dumplings, but also stirfried or pickled.

It said the practice became widespread in the last three years, particularly in warmer months when vegetables rot quickly in transit.

China’s wholesale vegetable dealers are not required to use refrigerated trucks for produce, and few can afford them.

In 2008, China’s Ministry of Health published a list of illegal food additives that included formaldehyde. The chemical has also been reportedly used to soak some dried seafood to make it appear more fresh and plump.

Formaldehyde can irritate the skin and cause breathing and digestive problems, and it is a known carcinogen.