Admiral has released details of its most bizarre claims from the last two years revealing our furry and feathered friends are often the culprits.

The car insurance specialist reported that for one unfortunate motorist, their pride and joy was destroyed by a nest of mice who took a liking to its stylish leather interior. Another motorist collided with a bollard after their front passenger pulled up the handbrake mistaking it for the puppy which had jumped down from their lap, and another drove into a telephone pole while trying to swat a fly inside their vehicle. 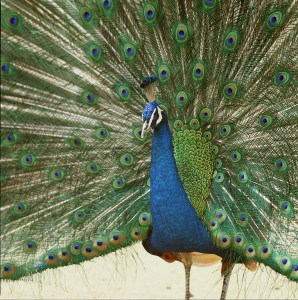 Peculiarly, peacocks seem to be particularly troublesome for many motorists and four out of the twelve most unusual animal claims involved the feathered poseurs attacking vehicles. These include a car clawed by a peacock after seeing its reflection in the paintwork and another damaged by a group of peacocks which had escaped from a neighbor’s garden.

“We asked our claims handlers to tell us about any unusual claims they had dealt with that really stood out for them and found that animals were featured in the most memorable ones,” said Dave Halliday, Admiral’s managing director.

Other unusual claims include a car damaged at a village fete when a miniature pony broke loose and climbed over the bonnet, a driver distracted by a camel and an elephant tethered at the side of the road that collided with a bollard and a man who leaned over to stroke his dog while driving and crashed as a result.

Another motorist caused a multi-car pileup after being startled by a spider dangling from the rear view mirror and a car was damaged by rats that entered the engine compartment and chewed through internal parts.

“These unusual incidents illustrate how important it is to remain focused on the road ahead at all times and not get distracted by animals whether they’re inside or outside your vehicle,” Halliday said.