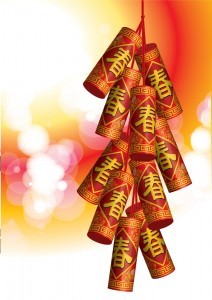 Readings of fine particulate matter called PM2.5 reached 1.593 milligrams per cubic meter on the Jan. 22 eve of the holiday, about 100 times worse than the amount considered good for 24-hour exposure, the city’s environmental bureau said.

The reading drew wide publicity in the local media on Sunday. The popular Beijing Youth Daily praised the city government for taking a more critical look at air pollution, while urging residents to consider the environmental effects of setting off fireworks.

By noon on Sunday, as people headed back to work after the weeklong holiday, the level stood at a relatively good 0.039.

Concern has grown over air pollution from automobiles and other sources, prompting the city this month to begin announcing measurements of PM2.5 – particles less than 2.5 micrometers in size. That’s about 1/30th the width of an average human hair.

Because of their small size, the particles can lodge deeply in the lungs and are believed to pose the greatest risk to health.

Beijing is frequently cloaked in yellow haze, with buildings a couple of blocks away barely visible.

On particularly bad days, schools cancel outdoor activities due to the risk of respiratory problems and hospitals report increased numbers of people – particularly the elderly – seeking help because they’re having trouble breathing. Long-term exposure can cause a range of illnesses, especially to the cardiovascular system.

The city previously only released readings of the coarser PM10 standard that often indicated pollution was “light,” leading to accusations it was hiding the true extent of the problem.

The U.S. Embassy began independently monitoring PM2.5 from a device on its rooftop and releasing the results via Twitter. Some residents even tested the air in their neighborhoods and posted the results online.

Beijing is now releasing hourly readings of PM2.5 that are taken from a monitoring site about 4 miles (7 kilometers) west of central Tiananmen Square.

Cyberattack on US Pipeline Is Linked to Criminal Gang