Europe’s air safety authority told airlines Friday to inspect nearly a third of the world’s A380 superjumbo jets within about six weeks after Airbus found new cracks in metal brackets inside the wings. 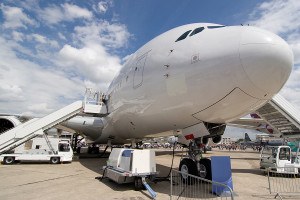 The European Aviation Safety Agency issued an airworthiness directive that called for “a detailed visual inspection” of the aircraft’s so-called “wing rib feet” – the metal brackets that connect the wing’s ribs to its skin.

“This condition, if not detected and corrected, could potentially affect the structural integrity of the airplane,” EASA said.

EASA said the order applies to 20 A380s. The agency gave airlines between four days and six weeks from Jan. 24 to carry out the checks. The deadline depends how much flying time the giant planes have clocked up.

Aircraft that have racked up 1,800 or more takeoff and landing cycles will have to be checked within four days, or another 14 cycles. Planes that have flown more than 1,300 will need checking within six weeks, or 84 cycles.

Airbus spokesman Stefan Schaffrath said that, in the meantime, “continued safe operation of the fleet is guaranteed.”

“Regarding production of future aircraft, modifications are under way,” he said.

Sixty-eight of the double-decker, $390 million jets are flying with seven airlines – including Dubai’s Emirates, the largest A380 operator with 20 of the aircraft now flying. The jet seats 525 people in three classes.

Airbus said Thursday that it had found new cracks on the brackets inside the wings of two superjumbos after inspections launched following the 2010 incident in which a Qantas A380’s engine disintegrated in flight.

It said the cracks were found “on a limited number of non-critical brackets,” on two of the nine aircraft inspected so far.

A different kind of crack on the rib feet was discovered and repaired on two of Singapore Airlines’ seven A380s following inspections that followed the November 2010 explosion of a Rolls Royce engine on the Qantas A380 flying from Singapore to Sydney.

That plane, carrying 466 people, returned to Singapore and made a safe emergency landing.

EASA said in Friday’s directive that “the new form of cracking is more significant than the original rib foot hole cracking.”