The billions of dollars in aid that flowed into Haiti after its shattering earthquake were meant to build a new nation with thriving farms, apparel factories, modern hospitals and paved roads in the countryside.

Ambitious plans call for $500 million to build 50 new grade schools, $200 million to give Port-au-Prince its first wastewater treatment plant, and $224 million to create an industrial park for 65,000 garment industry workers – all aimed at laying the groundwork for a new Haiti. 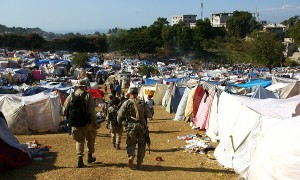 But as the hemisphere’s poorest country marks the second anniversary of the earthquake that killed some 300,000 people, only about half of the $4.6 billion in promised aid has been spent. Half a million people are still living in crowded camps. And only four of the 10 largest projects funded by international donors have broken ground.

The optimistic rallying cry promoted shortly after the earthquake, to “build back better,” has turned out to be much harder to achieve than anyone imagined. Reconstruction efforts have been stymied by the same problems that impoverished Haiti in the first place: chronic political instability, a lack of a robust central government, and a tattered infrastructure in a nation where, even before the earthquake, half the children did not attend school and more than half the population was unemployed.

Former U.S. President Bill Clinton, the U. N. Special Envoy to Haiti, said in an interview Wednesday that the reality of Haiti and its complicated history made the hoped-for reconstruction difficult.

“We had massive, massive problems in Haiti before the earthquake,” Clinton told The Associated Press. “A lot of this stuff we’re not trying to rebuild -we’re actually trying to do it right for the first time.”

Haitian President Michel Martelly also acknowledged that achievements have fallen far short of expectations, describing progress so far as “definitely, not enough,” in an interview with the BBC.

“But lately, since I have been in power, I will say that we have shown strong signals that things are changing and moving in Haiti,” said the president, who took office in May and whose squabbles with parliament have contributed to the delays.

The previous administration of President Rene Preval was crippled by the collapse of government buildings and showed little leadership in the aftermath. The election that brought Martelly to power was marred with irregularities and riots that paralyzed the capital. It took the politically inexperienced Martelly six months to install a prime minister because rival lawmakers rejected his initial two picks.

Against that backdrop were the high expectations fostered by international partners, including Clinton, who promised that Haiti would not come back as the same beleaguered nation. Instead, education, health, energy, agriculture sectors and infrastructure all would be overhauled, like starting a country from scratch.

The administration of Martelly, a former musician, abounds with ambition. His prime minister, Garry Conille, told Parliament Monday that the government wants to enroll another 1 million children in school this year, plant trees to stop decades of deforestation and improve health care.

Conille calls 2012 “a year of construction.”

But the efforts to create a new country so far have been met with frustration.

Lawmakers have grumbled that they witness little happening. Camp dwellers have demonstrated against the lack of housing and the evictions that have pushed them elsewhere. Others are exasperated over news of billions of dollars in aid that yields few visible results — large or small.

Nicolas Pierre, a 55-year-old farmer in the foggy mountains above Port-au-Prince, is still waiting for the president to make good on his promise of free transport for school children.

“Martelly hasn’t sent the free buses here,” said Pierre. “We have to carry the children in the mud.”

The 10 biggest internationally funded projects approved by the Interim Haiti Recovery Commission, or IHRC, are ambitious and complicated. They involve multiple partners, require bids for contracts and address a range of needs from job creation and health to energy, sanitation and education. It will take years for them to reach completion.

Yet even the planning has suffered. The recovery commission co-chaired by Clinton was set up to assure foreign donors that their money wouldn’t go wasted. The panel helped coordinate multi-million projects in a relatively transparent fashion and avoid duplication.

But in October the commission’s 18-month mandate ended, halting work on future projects, because opposition lawmakers took no action on a request by Martelly to renew the mandate for another 12 months.

So far, the biggest completed project is a $30 million state-of-the-art university in northern Haiti built by the Dominicans. On Thursday, the day of the quake anniversary, Martelly and President Leonel Fernandez of the neighboring Dominican Republic are scheduled to inaugurate the campus, complete with 72 classrooms, science and computer labs and a library for as many as 10,000 students.

Another project under way is the United States’ most ambitious. Budgeted at $224 million, the Caracol industrial park is taking shape as bulldozers clear a field for an industrial park run by South Korean garment manufacturer Sae-A Trading Co. Ltd. The project is expected to bring 65,000 jobs to a remote area outside Haiti’s second largest city, Cap-Haitien, with the first batch of T-shirts scheduled for production by September.

But the majority of the projects have been delayed by an array of problems ranging from an inability to secure funding to land disputes.

Seeking $79.6 million, a national food program sought to provide a hot meal to 2.2 million students in 6,000 schools in Port-au-Prince and the countryside. In the end, the meals only reached half that number because only $44 million was raised, said Myrta Kaulard, Haiti director of the World Food Program and one of the architects of the proposal.

“Why did the (Haiti Reconstruction Fund) not contribute to the program? I cannot really tell you,” said Kaulard, WFP’s Haiti director since 2008. “Perhaps there were other priorities.”

Clinton thought the program significant enough last year to tour the dusty grounds of a school that had received the meals. But even with his star power, the endorsement did little to bring donors to cough up money.

Another major holdup has been the dilemma of land ownership. The country’s land registry is in disarray, and title disputes are sometimes settled with guns or bribes.

Plans to build a $200 million wastewater treatment plant north of Port-au-Prince nearly collapsed last year when a powerful businessman claimed he owned a parcel of land on which the Spanish government and Inter-American Development Bank were building. The dispute was solved only after eight senior diplomats and heads of development groups appealed to then-Prime Minister Jean-Max Bellerive. The plant is scheduled to open in 2015.

Clinton said that though the going is slow, reconstruction is now gaining momentum.

“I think that there’s a real chance that in five years they’ll be far better off than they were before the earthquake,” he said.

Carpenter Kesnel Joselus hopes that’s true. On a mountainside above Port-au-Prince, the $500-million school project is coming to life. Joselus is laying the foundation for a 14-classroom school that will spare children a two-hour hike and allow their parents to harvest crops instead.

“If there are more educated children here,” Joselus said, “the community will be able to make progress.”