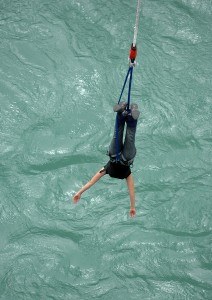 An Australian tourist bungee jumping in Africa plunged 365 feet (111 meters) into a river when her cord snapped, but she managed to swim to safety with a broken collarbone and her legs tied together.

Erin Langworthy told Nine Network television news Sunday that she blacked out briefly when she hit the Zambesi River on the border of Zambia and Zimbabwe on Dec. 31.

“I felt like I’d been slapped all over,” the 22-year-old from Perth said.

Video taken of the jump shows the cord snapping and Langworthy smacking into the river before the current pulled her into rapids.

“You get sucked under and then you pop up so it’s very disorienting – I didn’t know which was up or down,” she said.

She said the trailing cord repeatedly snagged, so she “had to swim down and yank the bungee cord out of whatever it was caught on to make it to the surface.”

Langworthy swam through the rapids to reach the Zimbabwe bank.

Southern Province Police Commissioner Brenda Muntemba told the Post Zambia newspaper that Langworthy was treated at a clinic in Zimbabwe before being evacuated to South Africa.

The jump from the Victoria Falls Bridge is operated by Safari Par Excellence, whose website describes the bungee experience as “111 meters (365 feet) of pure Adrenalin!”