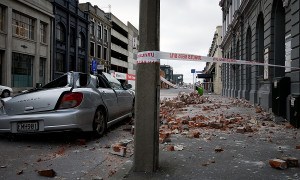 A series of strong earthquakes struck the New Zealand city of Christchurch on Friday, rattling buildings, sending goods tumbling from shelves and prompting terrified holiday shoppers to flee into the streets. There was no tsunami alert issued and the city appeared to have been spared major damage.

One person was injured at a city mall and was taken to a hospital, and four people had to be rescued after being trapped by a rock fall, Christchurch police said in a statement. But there were no immediate reports of serious injuries or widespread damage in the city, which is still recovering from a devastating February earthquake that killed 182 people and destroyed much of the downtown area.

The first 5.8-magnitude quake struck Friday afternoon, 16 miles (26 kilometers) north of Christchurch and 2.5 miles (4 kilometers) deep, the U.S. Geological Survey said. Minutes later, a 5.3-magnitude aftershock hit. About an hour after that, the city was shaken by another 5.8-magnitude temblor, the U.S.G.S. said, though New Zealand’s geological agency GNS Science recorded that aftershock as a magnitude-6.0. Both aftershocks were less than 3 miles (5 kilometers) deep.

The Pacific Tsunami Warning Center did not issue an alert.

The city’s airport was evacuated after the first quake and all city malls shut down as a precaution.

“We have had no significant injuries reported as a result of the earthquakes today,” he said.

Warwick Isaacs, demolitions manager for the Canterbury Earthquake Recovery Authority, said most buildings had been evacuated “as an emergency measure.” The area has recorded more than 7,000 earthquakes since a magnitude-7.0 quake rocked the city on Sept. 4, 2010. That quake did not cause any deaths.

Rock falls had occurred in one area and there was liquefaction – when an earthquake forces underground water up through loose soil – in several places, Isaacs told New Zealand’s National Radio.

“There has been quite a lot of stuff falling out of cupboards, off shelves in shops and that sort of thing, again,” he said.

Isaacs said his immediate concern was for demolition workers involved in tearing down buildings wrecked in previous quakes.

“It … started slow then really got going. It was a big swaying one but not as jolting or as violent as in February,” Christchurch resident Rita Langley said. “Everyone seems fairly chilled, though the traffic buildup sounds like a beehive that has just been kicked as everyone leaves (the) town (center).”

The shaking was severe in the nearby port town of Lyttelton, the epicenter of the Feb. 22 quake.

“We stayed inside until the shaking stopped. Then most people went out into the street outside,” resident Andrew Turner said. “People are emotionally shocked by what happened this afternoon.”

Around 26,000 homes were without power in Christchurch, after the shaking tripped switches that cut supplies, Orion energy company CEO Rob Jamieson said.

“We don’t seem to have damage to our equipment,” he said. “We hope to have power back on to those customers by nightfall.”

Hundreds of miles of sewer and fresh water lines have been repaired in the city since the February quake.

Despite the sizable quakes, there was no visible damage in the central business district, where 28 stores have reopened in shipping containers after their buildings were wrecked by the February quake, he said.

“Hopefully tomorrow we’ll be feeling a little bit better again and restoring our faith in the will to live and to stay in Christchurch,” the city’s deputy mayor, Ngaire Button, told National Radio.