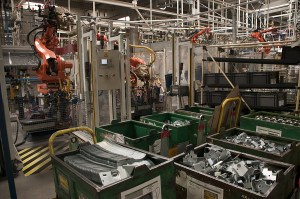 Toyota and other major automakers have begun scaling back production because of parts shortages from suppliers in flood-afflicted Thailand, just months after Japan’s own supply chains were decimated by a mammoth earthquake and tsunami.

The production woes stemming from Thailand’s worst flooding in five decades – which has wiped out hundreds of factories in recent weeks – come just as Toyota and others bounce back from the March 11 quake disaster that destroyed autos parts suppliers in Japan’s northeastern Tohoku region and upended car production around the world.

The disruptions from the two similar disasters are prompting manufacturers to reconsider how they select suppliers of parts for their vehicles: Risks can be lowered if parts manufacturers are spread out over more regions.

“One of the lessons we have learned from Tohoku is that we don’t want to have one single supplier for our components,” Nissan Motor Co. spokesman Christopher Keefe said Wednesday, echoing views repeatedly brought up in the industry in recent months.

Nissan was still assessing the damage from the Thai flooding, but its vehicle plant near Bangkok was unaffected so far, he said.

Toyota, Japan’s biggest automaker, suspended overtime work from Monday to Friday at four domestic Toyota factories and seven group companies that assemble cars and trucks. The company estimates it will lose 6,300 units due to the cutback, spokeswoman Shiori Hashimoto said.

That’s on top of the estimated 37,500 units in lost output through Oct. 21 from its three assembly plants in Thailand, which have been shut down since Oct. 10. They will remain suspended until Friday, Hashimoto said.

Thailand, where Toyota’s pickup trucks are popular, is a key production hub for the company. The biggest disruptions in Japan are coming from Thai parts suppliers, she said. Toyota’s own parts factory there has reduced shipments.

Thai authorities warned that the capital could be swamped by up to 5 feet (1.5 meters) of water if flood barriers fail. Bangkok’s second-biggest airport was shut down by the flooding, and the government declared a five-day public holiday starting Thursday in affected areas to deal with the disaster.

Moody’s Investors Service said production had been disrupted at more than 400 Japanese companies north of Bangkok, including not only the automakers but also electronics makers such as Sony Corp., Canon Inc. and Toshiba Corp.

The Thai flooding is dealing another blow to the supply chain that had been hurt by the March quake and will delay a full return to pre-disaster output for the automakers, Moody’s said.

“All told, the floods have cut Japan’s targeted car output from Thailand by nearly 90 percent, but Thailand’s share of global car exports is just one tenth of Japan’s,” Moody’s said.

Moody’s said Honda Motor Co.’s forecast for 270 billion yen ($3.5 billion) operating profit will likely be reduced by 10 percent, but earnings for Toyota and Nissan are unlikely to be hurt very much.

Among developments at other Japanese automakers:

– Honda Motor Co., has temporarily ceased production at its Thai and Malaysian factories due to parts shortages. In Thailand, both its motorcycle and auto production has been halted since earlier this month, it said.

– Mazda Motor Corp.’s auto production in Japan was unaffected but vehicle production at its Thai joint venture with Ford Motor Co. was halted. Hiroshima-based Mazda was considering shipping in parts from China and Japan, it said.