A powerful typhoon that left at least 13 people dead or missing, paralyzed commuter trains and dumped rain on tsunami-ravaged northeastern Japan was headed to the major northern island of Hokkaido on Thursday. 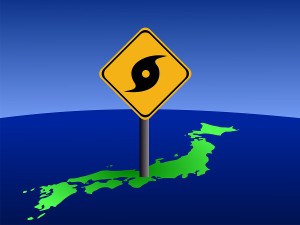 Typhoon Roke caused no immediate problems other than broken security cameras at the Fukushima Dai-ichi nuclear power plant, which had been in its path overnight. The plant had been sent into meltdown by the March 11 earthquake and tsunami, and efforts are still under way to bring the reactors under control.

Hiroki Kawamata, spokesman for plant operator Tokyo Electric Power Co., said several cameras set up to monitor the plant were damaged, but that there had been no further leaks of radioactive water or material into the environment.

“We are seeing no problems so far,” he said.

The storm passed just west of the plant on its way north late Wednesday. The typhoon brought new misery to the northeastern region, dumping up to 17 inches (42 centimeters) of rain in some areas.

Two people were rescued after they were found buried in a landslide in northern Iwate prefecture early Thursday, and one remained unconscious, Kyodo News agency reported.

Hundreds of tsunami survivors in government shelters in the Miyagi state town of Onagawa were forced to evacuate for fear of flooding.

More than 200,000 households in central Japan were without electricity late Wednesday. Police and local media reported 13 people dead or missing in southern and central regions, many of them believed swept away by rivers swollen with rains.

As of early Thursday, the typhoon had reached Hokkaido, weakening overnight to sustained winds of up to 78 mph (126 kph). There were no immediate reports of damage on Hokkaido.

The typhoon made landfall Wednesday afternoon near the city of Hamamatsu, about 125 miles (200 kilometers) west of Tokyo.

Overnight in Tokyo, where many rush hour commuter trains were suspended for hours, thousands of commuters got stuck at stations across the sprawling city and stood in long lines for buses and cabs.

“The hotels in the vicinity are all booked up, so I’m waiting for the bullet train to restart,” Hiromu Harada, a 60-year-old businessman, said dejectedly at Tokyo Station.

Fire department officials reported three people injured in Tokyo. In the trendy shopping district of Shibuya, winds knocked a tree onto a sidewalk, but no one was hurt. Pedestrians struggled to walk straight in powerful winds that made umbrellas useless.

The storm had set off landslides in parts of Miyagi state that already were hit by the March disasters. The local government requested the help of defense troops, and dozens of schools canceled classes.

A magnitude-5.3 earthquake struck late Wednesday just south of Fukushima in Ibaraki state. Officials said the temblor posed no danger to the Fukushima Dai-ichi plant, and that it did not cause any damage or injuries in the region.

Heavy rains prompted floods and caused road damage earlier in dozens of locations in Nagoya and several other cities, the Aichi prefectural government said. More than 200 domestic flights were canceled.

A typhoon that slammed Japan earlier this month left about 90 people dead or missing.