The American death toll from last month’s killer earthquake and tsunamis in Southeast Asia was reportedly increasing to 36 on Wednesday as officials added 20 more presumed dead to the list of 16 already confirmed.

According to State Department officials, in addition to those already confirmed killed, 19 were presumed dead in Thailand and one in Sri Lanka. More than 155,000 people have been reported killed as a result of the Dec. 26 disaster. 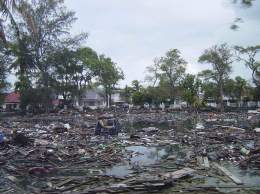 While some Americans may not have checked in with authorities or relatives since the event, authorities are also having to deal with the problem of hotel records listing guests washing away during the disaster.

Meantime, U.S. Secretary of State Colin Powell and Florida Gov. Jeb Bush continue their tour of the devastated areas as American military and other countries continue to supply water, food, medicines and more to the impacted countries.

Powell spoke to reporters on Wednesday and indicated that he was startled by the level of destruction he witnessed via an air tour of the Indonesian province of Aceh.