James Fitzgerald sold his motorcycle because his fiancee thought riding was too dangerous.

But he ended up not marrying her.

So in 2008, Fitzgerald bought another motorcycle.

He rides to work at a retail auto parts business in Springettsbury Township. A short ride home on his motorcycle makes any stress go away.

“The wind passing by your ears, it’s music to your soul,” said Fitzgerald. “It’s so relaxing.” 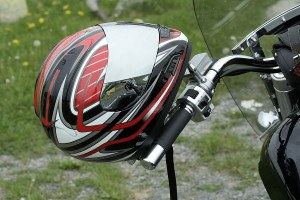 He is one of the many riders in Pennsylvania who often choose not to wear a helmet, despite increased risks of head injury if they get in a crash. For the 50-year-old Fitzgerald, that risk is just part of life.

“When your number’s pulled, the man upstairs doesn’t care whether you’re riding in a plane, a train, a bus or a motorcycle – you’re going, and there’s nothing you can do to stop it,” Fitzgerald said.

Fitzgerald is also a proud gun owner. His York Township home has multiple signs warning potential robbers of that fact.

He sees a connection between that gun ownership and riding a motorcycle without a helmet.

“I’m all about all kinds of freedom. Freedom of speech. …Freedom to carry a gun,” he said. “Freedom to ride a motorcycle without a helmet.”

But insurance groups, safety experts and doctors say that freedom to not wear a helmet comes with big risks. They say riding without a helmet significantly increases the odds of people dying or suffering a severe head injury if they are in a crash.

After Pennsylvania made it legal for adults 21 and older to ride a motorcycle without a helmet, the number of motorcycle deaths increased.

In the six years before the law, there was, on average, 122 motorcycle fatalities per year in Pennsylvania. In the 13 years since the law passed, that increased to about 199, a USA Today Network analysis found.

But John Kruger, a rider from Adams County, doesn’t believe that the people riding without helmets are the problem.

He has wrecked a motorcycle four times. He wasn’t wearing a helmet any of those times. In one crash, he dislocated a shoulder. In another, he sprained a wrist and ankle.

“But my pretty little face has always been fine,” said Kruger.

Kruger – whose face had a white Santa-style beard in December that he grew out for charity events – still rides without a helmet whenever he can. He doesn’t think he’s tempting fate.

He’s a former EMT, and he says he’s choosing the safer option. Without a helmet, Kruger said, he’s more likely to avoid an accident and better able to react if someone does hit him.

Kruger is the volunteer legislative coordinator for a group that takes credit for Pennsylvania’s helmet-less law: the Alliance of Bikers Aimed Toward Education of Pennsylvania.

That group’s lobbyist, Charles Umbenhauer, points to several factors that could be influencing the increase in motorcycle deaths.

There are more motorcycles on the road, said Umbenhauer. Regular motorcycle registration increased by about 60 percent from 2002 to 2016.

That means in some recent years, the rate of deaths per registered motorcycle has been lower than before the helmet-less law.

Umbenhauer said motorcycle riders often aren’t to blame for crashes. He said smartphones have led to a lot more distracted drivers in cars than there were 15 years ago.

So Umbenhauer remains committed to the view that trained riders 21 or older shouldn’t have to wear a helmet.

Is there a certain number of deaths that would make him reconsider?

“One word: Never,” Umbenhauer said. “Because it’s an adult’s right. …It’s just another risk. It’s part of living in a free society.”