It’s been five years since Superstorm Sandy struck the Eastern seaboard late during the 2012 hurricane season. Recently, local city and government officials were interviewed to give their perspective on the storm in a five-year overview video created by James Miller for the Federal Emergency Management Agency (FEMA).

The storm hit the Atlantic seaboard on October 29, 2012. Record storm surge was recorded along the coasts of New York, New Jersey, Connecticut, Rhode Island, and Massachusetts, according to NOAA. 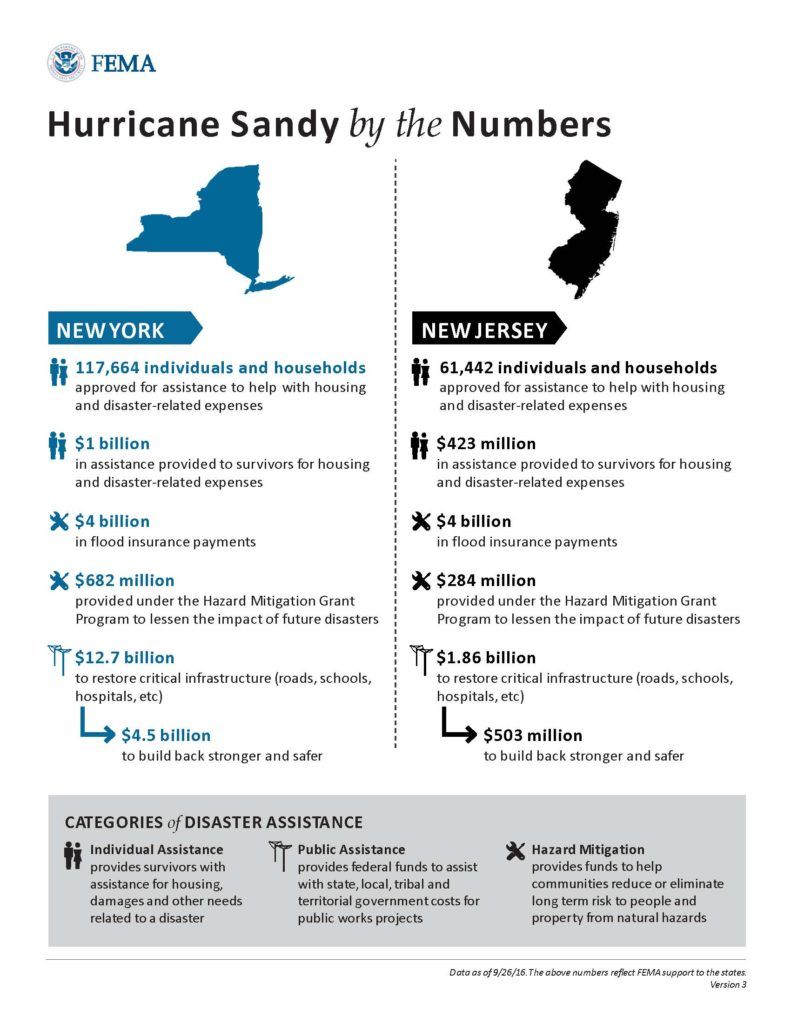 Officials discussed their perception of preparedness before the storm and whether that perception changed after Sandy’s destruction.

According to Adam Schneider, the mayor of Long Branch, New Jersey, the warnings prompted evacuations and set up of emergency shelters.”We had an idea of what was coming, we’d been through storm, but for a week we’d been told this was the big one. This was bigger than anything else you’ve ever seen,” said Schneider.

Jerome Hatfield, former deputy director of the New Jersey Office of Emergency Management, said they were more than prepared for Sandy.

“I think that some of the challenges we faced had a lot to do with mother nature on taking course into the equation and really changing the complexity of the impacts of Sandy to the coastline,” said Hatfield.

The mayor of Stafford Townships in New Jersey, John Spodofora, agreed that they were adequately prepared for the storm.

“We were absolutely ready, we’ve dealt with a lot of storms here,” said Spodofora. “We’re a coastal community and we’ve always had a lot of preparedness in place.”

Bill Vogel, FEMA’s federal coordinating officer in New Jersey at the time, stated they were as prepared as they could be.

“I’ve got to tell you though, that thing was the Perfect Storm,” added Vogel.

After the storm had cleared and losses were tallied, Sandy edged in at number four on the list of the top 10 costliest catastrophes in the U.S. The late season storm caused almost $19 million in insured losses (in 2012 dollars), according to Property Claim Services, a Verisk Analytics business.

Despite massive preparations in cities along the East Coast, many were surprised by the sheer force and damage caused by the storm.

Tony Vaz, the mayor of Seaside Heights, N.J., explained his shock at the devastation.

“I don’t think anyone thought what happened, would happen, and we were devastated. Even though we had a plan, the plan couldn’t meet the horrors of that storm,” said Vaz. “And then to get up at 5, 6 in the morning and then to walk out and see a disaster. Cars overturned, boats floating in the streets.”

FEMA’s coordinating officer in New York, Michael Byrne, was surprised by the flooding.

“Probably the thing that really kind of set me back was the devastation in Breezy Point. A hundred and eleven homes that burnt to the ground in the middle of a rain event and flooding event,” said Byrne. “It was just you know unimaginable that something like that would happen and yet it did.”

Vogel said that what made it so bad was that the storm occurred at high tide.

“It was a very significant storm but technically it was not nearly as bad as what it could have been. But because of the tidal surge, because of the perfect storm, because of the phase of the moon, it had landfall within 10 minutes of the highest point of high tide in Sandy Hook. So, therefore with the high tide and the surge and the waves on top of that there was so much devastation on the beach,” Vogel explained.

There was a lot of structural damage in his town, Spodofora said.

“This was above and beyond anything I’ve ever seen before in Stafford township. I was absolutely in shock, said Spodofora. “I was here for the ’62 storm, the ’92 storm and those others, none of them have ever done this type of damage to Stafford Township.”

Though recovery is a long process, according to Vogel and Schneider, if it’s done right it will lead to better resilience in the wake of future storms.