The crux of the decision was that Ashley Reed’s liability under the judgments was based on the sale – not the advertising – of counterfeit Fendi products. Fendi did not even allege it suffered injury because of advertising conducted by Ashley Reed. Instead, damages were awarded based on sales of counterfeit products. As a matter of common sense, the court said, there is a difference between placement of a counterfeit brand label on a handbag and the act of soliciting customers through printed advertisements or other media. Here, the Fendi brand and logo were used for product misidentification, not as an advertisement.

The decision, United States Fidelity And Guarantee Company v. Fendi North America, Inc. et al., was filed May 17, 2016 and is reported at 2016 U.S. App. LEXIS 8973. It affirmed a published decision of the U.S. District Court for the Southern District of New York, reported at 43 F. Supp. 3d 271, denying insurance coverage to Ashley Reed – and depriving its judgment creditors of a money source to satisfy their judgments. 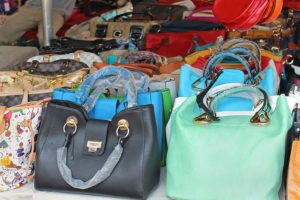 The operative facts were that Fendi, through its several companies, manufactured luxury handbags, shoulder bags, purses, wallets and other items and owned associated federally-registered trademarks. Ashley Reed sold “off price” branded handbags and other luxury goods in New York and elsewhere. Burlington Coat Factory Warehouse Corporation and its subsidiary purchased clothing and merchandise at wholesale and resold them to the public at discounted prices. Burlington regularly purchased merchandise from Ashley Reed. During the relevant time period, Ashley Reed sold counterfeit Fendi goods – fashion accessories that were not Fendi products, but which displayed Fendi trademarks and otherwise had the appearance of genuine Fendi products – to Burlington and others.

The insurance coverage dispute decided by the court arose when Fendi sued Ashley Reed for trademark counterfeiting, false designation of origin, trademark dilution and unfair competition. Fendi asked for treble damages, alleging that Ashley Reed intentionally used the Fendi trademarks with knowledge that they were counterfeit. The United States District Court entered a permanent injunction and awarded Fendi treble damages, pre judgment interest fees and costs, all of which totaled $34,650,885.91.

Going further, the Court of Appeals denied insurance coverage for two more reasons. First, Ashley Reed could not have reasonably expected it would be indemnified for loss it suffered by disgorging the profits it improperly derived from selling goods it knew bore a false designation of origin. In this regard, the court cited cases standing for the well established rule that one cannot purchase insurance to indemnify it for resulting loss when it is forced to disgorge money or property it acquired wrongfully.

Second and finally, the USF&G policies issued to Ashley Reed all included a falsity exclusion, providing that there was no coverage for an advertising injury “arising out of oral or written publication of material, if done by or at the direction of the insured with knowledge of its falsity.” To the extent that Ashley Reed’s use of the Fendi logo on its handbags might arguably have constituted advertising — which the court emphasized was not so — the falsity exclusion would be triggered because the record was clear, according the court, that Ashley Reed intentionally placed the Fendi logo on its handbags with knowledge that it would be selling goods bearing a false designation of origin.

Richard B. Wolf is a partner in the Los Angeles office of the nationwide law firm of Lewis Brisbois Bisgaard & Smith LLP. Since 1970 Mr. Wolf has specialized in insurance coverage advice and litigation. He is a member of the Los Angeles Chapter of the American Board of Trial Advocates (ABOTA).