Bicyclists can get little respect on the road – from drivers, pedestrians, even fellow cyclists.

Sometimes the angry stares are deserved, but more often the friction stems from the fact that bicycles, cars, buses, trucks and pedestrians are scrabbling with each other for a narrow sliver of the same street.

Bills aimed at helping protect bicyclists are a focus of the first public hearing of the year at the Massachusetts Statehouse on Wednesday before the Legislature’s Transportation Committee.

Richard Fries, executive director of bicycling advocacy group MassBike, says the group is hoping to hear testimony from “the families and friends of victims whose lives and limbs may have been spared if these laws had been in place.”

One of the bills MassBike is keeping a close eye on would require side guards on trucks and other large vehicles.

Activists say more than half of bicyclists killed by trucks first hit the side of the truck and are then swept beneath. Side guards are intended to help block bicyclists from being pulled under a truck’s wheels.

Boston passed an ordinance requiring side guards on trucks in 2014. Mayor Marty Walsh praised the move, calling the guards a low-cost feature that can save lives.

“We’re seeing more Bostonians choosing bikes as their primary mode of transportation, but with this increase in use, we’ve also seen an increase in crashes between cyclists and vehicles,” Walsh said when the measure was adopted by the Boston City Council.

Another bill would ban drivers from stopping or parking their cars on any lane officially designated for the use of bicycles. Violators would face a $100 fine. 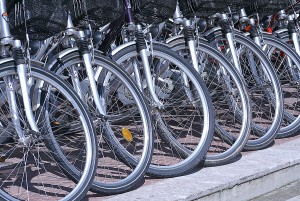 Many cities and towns have begun designating portions of roads as bicycle lanes, often by painting lanes on the street. Sometimes the lanes are blocked by double-parked cars or drivers who have pulled into the lane to stop – forcing cyclists to veer into traffic.

Bicycle advocates are pushing for another bill set to come up at Wednesday’s hearing.

The measure would require motorists to provide a minimum of 3 feet when passing a bicyclist or other “vulnerable user,” even if it requires them to cross the center line to do so. The bill would add cyclists to police, first responders, construction workers, pedestrians and others defined as vulnerable users.

MassBike pointed to research it said shows that bicyclists being struck from behind account for 40 percent of fatalities.

A fourth bill would require cars to yield for bicyclists and pedestrians who are using a crosswalk that is also part of a bicycle path. Currently bicyclists are technically supposed to walk through such intersections, something activists say is unrealistic.

Massachusetts is seen as more welcoming to bicyclists, and has watched the popularity of Hubway, Boston’s bike-sharing system, grow. The League of American Bicyclists ranked the state fourth in its 2015 list of states most friendly to bicyclists, up from tenth in 2014.

Despite those efforts, bicycling isn’t without risk.

Several bicyclists have died on the road in the state in 2015, including Swiss surgeon and medical researcher Dr. Anita Kurmann, 38, who was struck by a flatbed tractor-trailer in Boston in August.

Just this week, on Wednesday, another cyclist – a 54-year-old man from Shrewsbury – was struck while riding along Route 9 in Worcester.