Daimler AG’s Mercedes-Benz sport- utility vehicles are the least likely SUVs to be recovered once stolen, as thieves target luxury models to export or dismantle.

Thirty-seven percent of the stolen GL Class SUVs are unrecovered, compared with 30 percent for Cadillac Escalades, the National Insurance Crime Bureau said. The figure is less than 15 percent for the Nissan Rogue and Ford Explorer, according to the NICB, which released a report today on thefts of 2011-2013 model years in the 48 months ended Dec. 31. 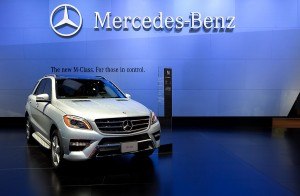 Carjackers and thieves who are paid as much as $8,000 for an auto have been targeting luxury vehicles in New York and New Jersey and working with middlemen who load them into shipping containers for transport to West Africa, authorities said Feb. 27. Agencies including the New Jersey Attorney General’s Office announced charges that day against 29 people in connection with a theft ring.

“This ring we took down was a double threat,” acting Attorney General John Hoffman said in a statement that day. “Its members committed carjackings that put the public in grave danger, while at the same time, through their fencing and shipping operations, they created demand that motivated others to commit carjackings.”

New Jersey had the highest number of unrecovered SUVs, 368, followed by New York, the data show. The states combined for about a quarter of the unrecovered thefts in the U.S.

“There’s a concentration of wealth in that area,” Frank Scafidi, a spokesman for the NICB, said in a phone interview, when asked about the lower recovery rate in the region. “Some of that could be a function of access to ports.”

Scafidi said that theft has become less prevalent over the past two decades, in part because of technology that allows law enforcement to track vehicles. The authorities who announced the arrests said that criminal crews would store stolen cars at locations including hospital parking garages and warehouses to makes sure they weren’t equipped with such devices.

Then after a “cool-off” period, the cars were moved to the middlemen, the authorities said. Sophisticated rings may also dismantle stolen vehicles for parts, the NICB said.

The most frequently stolen SUV, according to the NICB, was Ford Motor Co.’s Escape, though 95 percent of them are recovered. Among Rogues, made by Nissan Motor Co., 87 percent are found. For the Cadillac Escalade, made by General Motors Co., the figure is 70 percent. The report counted a car as unrecovered if it wasn’t found through March, Scafidi said.

The largest U.S. auto insurer is State Farm Mutual Automobile Insurance Co., followed by the Geico unit at Warren Buffett’s Berkshire Hathaway Inc. The NICB, based in Des Plaines, Illinois, is an industry group dedicated to detecting and preventing fraud and auto theft.