The Jersey shore’s beaches are in their best shape in years heading into the Memorial Day weekend, the result of a massive replenishment project after Superstorm Sandy and some simple good luck: a series of brutal winter storms that took it easy on the coastline.

Most of the storms did little or no damage to the shoreline and instead dropped snow over inland areas without causing significant erosion along the coast.

Couple that with the federal beach replenishment underway along most of the Jersey shore, and you’ve got a potentially primo beach season as the second summer following Sandy nears. 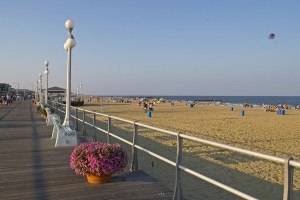 “The beaches actually came through the winter pretty well,” said Jon Miller, a coastal expert at Stevens Institute of Technology in Hoboken. “We had a rough winter in terms of snow and cold, but the nature of the storms was such that they didn’t cause a lot of erosion. Most of the storms took a land route rather than over water. Part of it was just dumb luck.”

New Jersey’s luck was all bad during the Oct. 29, 2012, storm that damaged or destroyed 360,000 homes and businesses, causing an estimated $37 billion in damage. Houses were pulverized, boardwalks smashed into kindling, beaches were washed away and a roller coaster was pitched into the ocean.

But this past winter, the five biggest storms didn’t generate the kind of wave action that caused so much damage during Sandy, experts said.

Another major factor in the robust condition of the beaches is the ongoing replenishment project that pumps sand from offshore sites onto the beaches. The U.S. Army Corps of Engineers is restoring the beaches to their pre-Sandy condition.

Sandy Hook, Sea Bright and Monmouth Beach are all in good shape following replenishment work, which is ongoing in Long Branch. Miller said several beaches to the south of Long Branch, including Deal and Loch Arbour, are “the missing link” because they had not previously been replenished and have very little sand right now. They are due to be replenished this fall or winter.

Another segment from Asbury Park to Manasquan recently ended.

Replenishment work from Point Pleasant Beach to the Barnegat Inlet should be done in the fall or winter. But parts of Long Beach Island, including Harvey Cedars, Surf City and Brant Beach, have been replenished.

The beaches of Bay Head, Mantoloking and Brick – among the hardest hit by Sandy – are a traditional erosion hot spot. Residents and government officials are hardening the coast with rock barriers and a steel sea wall to protect the coast until a replenishment project occurs there.

“Northern Ocean County is still a problem,” said Stewart Farrell, director of Stockton College’s Coastal Research Center. Homeowners in many of these towns have been reluctant to sign easements allowing the Army Corps to do replenishment work.

As a result, some beaches in those areas are either in the same or worse condition than they were just before Sandy hit, he said. Mantoloking, for instance, has created temporary makeshift dunes, which are no more than giant piles of sand pushed as high as possible by bulldozers.

The Atlantic and Cape May County beaches suffered much less damage from Sandy than their northern counterparts and are in fine shape heading into summer, with widening work having been done in Atlantic City, Ventnor, Brigantine, Stone Harbor, Cape May and the northern part of Ocean City. The southern half of Ocean City, along with Upper Township and Sea Isle City, is due for replenishment next winter.