The captain of a replica 18th-century sailing ship that sank off North Carolina in Superstorm Sandy made a reckless decision to sail the HMS Bounty into the hurricane’s well-forecast path, the National Transportation Safety Board reported Monday. 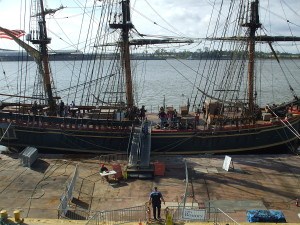 The three-masted wooden sailing ship sank about 125 miles southeast of Cape Hatteras in October 2012 as Sandy churned up the Atlantic seaboard. The newly released NTSB report said Capt. Robin Walbridge’s “reckless decision” to sail into the storm subjected the aging vessel and its inexperienced crew to conditions they couldn’t surmount.

One member of the HMS Bounty’s 16-person-crew died and Walbridge was never found after the sinking off North Carolina’s Outer Banks, an ocean expanse with a history of shipwrecks. Three other crew members aboard the vessel – built for the 1962 film “Mutiny on the Bounty” starring Marlon Brando – were seriously injured.

“Although this wooden ship was modeled after an 18th century vessel, the captain had access to 21st century hurricane modeling tools that predicted the path and severity of Hurricane Sandy,” NTSB Chairman Deborah A.P. Hersman said in a statement. “The Bounty’s crew was put into an extraordinarily hazardous situation through decisions that by any measure didn’t prioritize safety.”

Superstorm Sandy was one of the most destructive storms in U.S. history. Although it had weakened to a post-tropical cyclone when it made landfall in New Jersey, its enormous size pushed a catastrophic storm surge toward much of the heavily populated East Coast.

Besides “Mutiny on the Bounty” the ship was featured in several other films over the years, including one of the “Pirates of the Caribbean” movies. When not in use by moviemakers, the ship was a pierside attraction for visitors in ports and also served as an educational ship that taught people how to sail.

The 108-foot-long ship set sail from New London, Conn., for St. Petersburg, Fla. on Oct. 25, 2012, a day after Sandy reached hurricane strength. The plan was for the Bounty to arrive in St. Petersburg for a Nov. 10 event. But early in the morning of Oct. 29, 2012, the ship sank after taking on more than 10 feet of water. Crew members had to swim for their lives in the dark when the ship overturned.

“It was an end to a voyage that should not have been attempted. To set sail into an approaching hurricane introduced needless risk,” the NTSB report says.

During testimony last February at a Coast Guard hearing in Portsmouth, Va., surviving crew members repeatedly said Walbridge believed a ship was safer at sea in a storm than in port. Before sailing, Walbridge told nervous crew that his plan was to sail the Bounty on a southeasterly course and let the hurricane pass southwest of it.

But as the ship headed south, the path of the storm changed and began heading west. Walbridge, too, decided to head west – directly into Sandy’s path.

“It is possible that the captain may have focused too narrowly on the position of the storm’s eye instead of on Sandy ‘s total expanse,” said the NTSB report, noting storm winds spanned more than 1,000 miles in diameter, and that the Bounty was heading into an area already under tropical storm warnings.

“Still, the captain seemed to believe that he could outrace the storm,” the NTSB report added.

It said Walbridge had hoped winds around the storm system would push the vessel southwest toward Florida, but that he and senior crew seemingly failed to anticipate the effect prolonged exposure to the storm would have on the wooden vessel.

While the NTSB report details numerous events leading to the sinking, it places the bulk of the blame on Walbridge.

Among other things, it noted that while the Bounty took on water even in good sailing conditions, he gave no order to ensure the ship’s pumps were fully working before leaving Connecticut even though rough seas were expected. Some wood rot also had been recently discovered on the ship, the NTSB said.

The HMS Bounty Organization is facing a $70 million lawsuit in Long Island, N.Y., from the mother of deceased crewmember Claudene Christian, 42. The lawsuit claims negligence, saying the vessel wasn’t seaworthy and that Walbridge shouldn’t have taken it out to sea. The Bounty’s former engineer, Christopher Barksdale, is also suing the East Setauket, N.Y.-based Bounty organization and its owner for an unspecified amount.

During the 2013 Coast Guard hearing, the owner of the HMS Bounty, Robert Hansen, declined to testify by invoking his Fifth Amendment right to be protected from incriminating himself.