A week after a Manhattan fire killed a young playwright, a New York City lawmaker proposed a new fire-safety requirement for high-rise apartment houses that could save lives.

City Councilman Corey Johnson told a news conference Monday that buildings taller than six stories should be required to have emergency public-address systems so first responders and building managers can communicate better with residents. 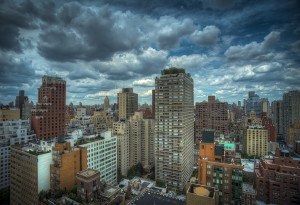 The 27-year-old playwright, Daniel McClung, was overcome by smoke in a stairwell near the 31st floor of The Strand apartment building on Manhattan’s West Side after fleeing his 38th-floor Manhattan apartment on Jan. 5, when flames swept through a unit 18 floors below. McClung’s 32-year-old husband, Michael Todd Cohen, is still in the hospital recovering from smoke inhalation.

The two had left their apartment, which was not on fire, and were trapped in the smoke.

The blaze was sparked by an overloaded power strip in a 20th-floor apartment at the condominium, authorities said.

Fire officials have said residents would have been safe staying in their apartments because of the building’s fireproof design. But in many buildings, Johnson said, residents don’t know that following their instinct to try to get out may not be the best way to survive.

“The tragic death at The Strand was entirely preventable,” Johnson said, adding that “the groundswell of local support around this issue was stunning.”

A friend of the couple, Javier Morgado, started an online petition calling for public address systems to be installed in emergency stairwells in all high-rises. It has received more than 5,000 signatures.

He then reached out to Johnson’s office, which drafted the legislation and met with Morgado last week.

The Fire Department had no immediate response to Johnson’s proposal. Some commercial buildings and hotels already have such systems.

Currently, public address systems are required for all residential buildings that are over 125 feet tall and built in or after 2009, when the building code went into effect, according to the city Department of Buildings.

The councilman was joined by former FDNY Commissioner Tom Von Essen, who said there was “no question” that such a system would save lives.”

In fireproof buildings such as The Strand, “the instruction would be not to get out,” Von Essen said. “Chances are in a big, high-rise residential building, the safest place for you to be is in your apartment.”