Squeezing a bunch of structures together along a street made of wood is probably not the way to go when building a fire-resistant neighborhood. And yet there they are, in many New Jersey shore towns. 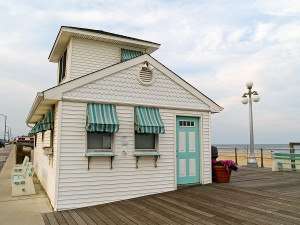 South Jersey boardwalks in Atlantic City, Ocean City and the Wildwoods are no strangers to fire, even as devastating as the blaze that destroyed more than 50 businesses and much of the Boardwalk in Seaside Park and parts of Seaside Heights earlier this month.

Each city’s boardwalk has unique aspects that challenge firefighters.

“Any time you get a fire on the Boardwalk, it’s a serious fire” Atlantic City Fire Chief Dennis Brooks told The Press of Atlantic City.

No city is as knowledgeable about boardwalk fires as Atlantic City, which saw several in the early days of the original, permanent Boardwalk.

More recently, a 2009 blaze at Schiff’s Central Pier caused by homeless people starting fires under the Boardwalk caused more than $2 million in damage, while a 2007 arson fire destroyed five businesses and caused minor damage to the Casino Control Commission office.

The first problem in dealing with a boardwalk fire, Brooks said, is that, unlike a street-level building, all six sides are exposed to the elements because the underside is exposed.

“And it’s almost like a fireplace, too,” Brooks said. “You know the air underneath when you start a fire in a fireplace? It’s the exact same thing.”

Another problem: wind, “an almost never-ending volume of wind off the ocean to fuel it.”

And support columns for the Boardwalk are treated with highly flammable creosote, used to preserve wood.

“Once the creosote gets started,” Brooks said, `”t’s almost impossible to stop.”

In Wildwood, one major difference from Seaside Park’s boardwalk is the elevation, Mayor Ernie Troiano said.

“Our boardwalk is higher, at an elevation of 14-and-a-half to 15 feet,” Troiano said. “We do have boardwalk fires, plenty of them, but but we’re able to put crews under the boardwalk as well as on top.” 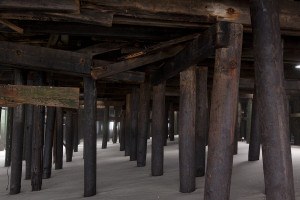 Wildwood Fire Chief Chris D’Amico said that Seaside’s boardwalk was only 3 feet off the ground, preventing firefighters from getting underneath. Atlantic City’s is about 12 to 14 feet high.

The distance from the water also helps. Brooks added that in Atlantic City, unlike the “high and dry” piers in Wildwood, fire crews can get under the Boardwalk only during low tide.

Another major difference, Troiano said, is that the buildings on the Seaside Park boardwalk didn’t have street breaks.

“It was one large, continuous group of stores,” Troiano said – which, including the buildings along the street and the parallel buildings on the other side of the boardwalk adjacent to Funtown Pier, formed a kind of enclosed horseshoe. “We have a street end on every block, so unless the winds are 30, 40, 50 mph, (a fire) couldn’t get to the next block of the boardwalk.”

In Wildwood, two things have helped in preventing or limiting fires in boardwalk structures, D’Amico said. The Fire Department has handled inspections itself since 1989, he said, and buildings lining the boardwalk are no longer made of wood but of block concrete, making each business its own enclosed “cubicle.”

The boardwalk itself has evolved, as well. On Thursday morning, D’Amico stood on the high-quality Ipe wood installed at Schellenger Avenue, part of a $3.75 million project funded by a federal grant and through the state Urban Enterprise Zone program. Strong enough to support a 20-ton pumper truck, the tropical wood is extremely fire-resistant and will barely be charred after being exposed to flames for a half-hour or more, D’Amico and Troiano said.

That’s in contrast to some of the older sections, which will go up “like a match,” Troiano said.

The key to fighting a boardwalk fire, Brooks said, is an aggressive initial attack.

“If you don’t get water on it in the first three to five minutes, it’s really going to start (moving) on you,” Brooks said. “You may start sacrificing a couple stores. That sounds harsh and unreasonable, but in the end you’ll save a lot more property than chasing it from store to store to store.”

In the Central Pier fire, even though water was on the blaze within three minutes, it had already worked its way under the pier, Brooks said. Firefighters created a cut in the building’s roof and were able to halt the fire’s progress at the central arcade, preventing it from moving to the northern end of the pier.

In the 2007 fire, crews were able to get large amounts of water on the structure, but the fire was fueled by the building’s contents – “racks and racks and racks of T-shirts,” Brooks said – and the thick Styrofoam exterior, essentially reconfigured petroleum under a micro-thin layer of stucco. The Ipe wood Boardwalk, however, was mostly undamaged.

But even getting water to a boardwalk is often a challenge. Ocean City Deputy Fire Chief Jim Smith said that many “dead end” water mains stop at the street ends, so the department has a designated boardwalk truck they use to save time.

Atlantic City, by comparison, has a hydrant system right on the Boardwalk capable of generating 1,500 gallons a minute. Exterior hose lines, held up by four firefighters, pump additional streams of 750 gallons a minute.

In Wildwood, a FEMA grant allowed for the purchase of a pumper truck small enough to cross below the Boardwalk, D’Amico said.

In addition, Morey’s Piers is in the middle of a four-year upgrade to its fire systems, including water mains at the midway point of Mariner’s Landing pier that can connect with the pumper – complementing mains at street ends – and a “deluge valve” located in the pier’s security office. If activated during winter, when the “dry hydrant” system is empty due to potential freezing, the deluge valve would fill the entire system with water if necessary.

As for the reported cause of the Seaside fire – electrical wiring damaged by Hurricane Sandy – “should be no surprise,” Smith said. “We’ve had (that situation) throughout homes in town, with water getting into crawl spaces.”

Added Brooks, “it degrades within minutes of being submerged in water. The contaminants start to eat away at the jackets. In Seaside, they got away with it the whole summer – then boom.”

You don’t have to tell Stan Kiska about the hazards of being located on a wooden strand. Kiska operates Playcade locations on both the Atlantic City Boardwalk and the Sea Isle City Promenade, made of fire-unfriendly concrete. The difference between the two locations?