Virginia Tech researchers are working with the state on a project aimed at reducing accidents on a fog-prone stretch of Interstate 77 in Carroll County.

The Virginia Department of Transportation plans to install a variable speed limit system along the interstate between Fancy Gap and the North Carolina border. The system’s signs can be quickly changed to drop the speed limit when visibility is reduced, The Roanoke Times reports.

Researchers at the Virginia Tech Transportation Institute are conducting a study to determine the ideal brightness and color for the new signs.

VDOT plans to spend an estimated $8.5 million on the system, which includes installing 22 variable speed limit signs in both directions. The system also will have cameras and detectors for fog, wind and traffic. It is scheduled to be completed by July 2015.

“Basically the approach that VDOT is taking is to try and gather as much information as possible about the road and sort of mass it into a cohesive message and deliver that message to the driver,” said Ronald Gibbons, who directs the Center for Infrastructure Based Safety Systems at the institute.

Currently, there’s only one electronic message board in each direction near the fog-prone area to warn motorists. 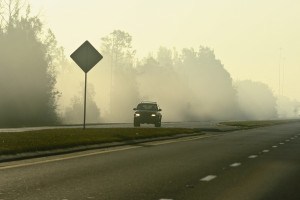 A 95-vehicle pileup on March 31 that killed three people and injured 25 “kind of drove home the point that this is something that we need,” research faculty member Brian Williams told the newspaper.

The most recent accident occurred Saturday when an Ohio man was killed in a six-vehicle crash.

Some local residents avoid traveling I-77 in the Fancy Gap area.

“I don’t travel that road even when the weather’s pretty,” said Phil McCraw of Cana, a member of the Carroll County Board of Supervisors.

McGraw travels Virginia 52, a curving two-lane road, instead. He said he believes it is safer than I-77.

Carroll County school buses don’t use I-77 between Fancy Gap and Cana. Parents in the area voiced “concerns about the welfare of their kids coming up and down Interstate 77,” said Mark Burnette, assistant schools superintendent, citing heavy tractor-trailer traffic and the interstate’s steepness.

Joey Haynes, a Carroll County school board member, said that the community would welcome an improvement in safety. He couldn’t say whether school officials will revisit school bus routing after the new sign system has been installed.

“You’ll still have the same mix of commercial vehicles and fast-moving traffic and weather conditions. I think those things will always be a constant. Whether or not technology can figure out a way to secure those concerns is just something we’ll have to wait and see,” he said.