High-tech radar may provide a good sense of what the day will look like, but radar alone isn’t always good enough. Sometimes weather spotters are needed to help with warnings and to verify radar data. 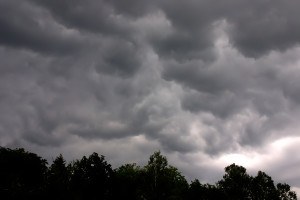 Over 300,000 certified SKYWARN spotters throughout the nation volunteer their time to report severe weather to the National Weather Service. The service, part of the U.S. Department of Commerce, established SKYWARN.

These are not storm chasers, but volunteers who provide visual evidence and other reports of what’s going on in the sky. Meriden native and Wolcott resident Jay Dobensky received his certification about three years ago and learned how to safely monitor storms.

Dobensky, 42, a 1988 Maloney High School graduate, explained that spotters should never be confused with storm chasers. They simply monitor the weather as it happens and report it to the best of their ability to the Weather Service.

“As good as meteorology and the NWS is, they still need boots on the ground,” Dobensky said. “Technology can’t reach everything … Things get missed.”

As a weather fan whose passion for precipitation began as a boy, Dobensky thought he had a pretty good grasp on meteorology. While attending a certification class years ago, Dobensky realized he had a lot to learn.

“It really helps you understand the proper forecasting and identification,” said Dobensky, a part-time student studying meteorology while he continues his full-time job running an audio/video installation company. He’s known on Twitter and Facebook as “Storm Trooper Jay,” which city resident Mark Hughes dubbed Dobensky due to his love of weather.

On a recent weeknight, residents from all over the state gathered at the Connecticut Police Academy on Preston Avenue to attend a SKYWARN spotter class. Many of the students were new and excited to learn. Michael Silva, a general forecaster at the NWS in Upton, N.Y., led the class. The Weather Service in Upton serves portions of New York, New Jersey and all of southern Connecticut.

“This is your basic spotter training class,” Silva said. “It does not mean you are experienced weather spotters. We give you the tools for what it takes to be a weather spotter.”

Silva encouraged the class to take the course every three years as a refresher.

When spotting severe weather, Silva told his class of about 40 to remain clam, speak clearly and report all the facts. He then introduced the class to thunderstorms. Severe thunderstorms include hail, wind gusts of about 58 mph and the possibility of a tornado forming.

Silva also told his class that lightning can strike up to 30 miles away from the storm. It’s safe to go outside 30 minutes after the last clap of thunder is heard, he said.

The second half the class dealt with tornadoes.

Using his knowledge of weather and spotting, Dobensky called in hazardous weather in June. He happened to be at the right place at the right time when he began taking pictures of some menacing clouds. He said he uploaded the pictures to his computer and zoomed in on one. Dobensky saw what he thought could have been a tornado. He sent the photos in to the National Weather Service and was told he probably saw a weak funnel cloud near the Waterbury and Wolcott line.

This was on the same day tornadoes came down in the Windsor Locks area.

Dobensky said if he didn’t call it in, no one would have ever known the weather happened.

“It pushes me to continue this,” he said.

At the Connecticut Police Academy, Pat Connolly was learning a lot at the spotter class. She is part of her community’s emergency response team in Orange. She said she wanted to become familiar with certain types of weather.

“What we do is prepare people for storms,” she said. “The more knowledge the better.”