Bob and Pat Smith have seen many floods in their 47 years on Water Street, but none as severe as in Superstorm Sandy. Last year’s storm waters rose halfway up their front door and left a debris field of mud and mold that took months to clean. In their early 70s and semi-retired, the Smiths say they’ll contemplate a government buyout.

Tom Deltz, who lives at the end of Lee Avenue closest to the South River, says flood insurance helped defray the $70,000 it cost to replace heating and cooling systems, rewire his property and buy furniture and appliances after thigh-deep flood waters invaded the ranch home he built 21 years ago. He was among the first to return after living with a sister for four months, and he wants to stay put.

Mary Rasmussen, who has assembled a makeshift kitchen on a first-floor landing months after flood waters topped the kitchen counters, is frustrated after spending many hours applying for storm aid and getting no grants in eight and a half months. “We don’t want to move,” she says, summing up the feeling of many in the neighborhood. “Yet we’re afraid to stay.”

The South River homeowners are among 281 in the Middlesex County borough and adjacent Sayreville targeted for the first post-Sandy buyouts under New Jersey’s Blue Acres program. Under the program, the state purchases and demolishes flood-prone homes, then returns the property to wetlands.

The homeowners spoke with The Associated Press, which is tracking them throughout the buyout process, as they grapple with the wrenching choice of whether to stay or go, a decision they are finding both financially vexing and emotionally challenging.

Pat Smith tears up as she talks about wanting to spend one last Christmas in the two-story house her four children grew up in. Deltz, 58, doubts that he’d be able to find housing for himself comparable to the corner property he has now with a fenced-in yard for his four dogs. And Rasmussen, who has been trying to sock away enough money so she can retire, doesn’t want a mortgage at age 68.

Ultimately, it will be a choice to move on or elevate the house and face significantly higher flood insurance premiums or, for those who own their homes outright, roll the dice and not carry insurance.

When Gov. Chris Christie stood in front of the Smiths’ house this month to announce that 76 homes here were eligible for buyouts from a $300 million pot of federal post-Sandy aid, he made it clear there would be no government takeovers of homeowners’ land.

“We want to work cooperatively with people,” Christie said. “People who want to sell, we’re ready to help them buy out. People who want to stay, as long as they comply with the new rules to make their property stronger, then we’ll be supportive of that.”

In all, the state hopes to buy 1,000 homes that flooded during Sandy, the worst storm in state history, and about 300 in the Passaic River basin that flood repeatedly. The state is interested in buying back blocks or neighborhoods, not creating a checkerboard of homes and vacant lots, Christie says. Just like any other real estate transaction, it won’t be final until the deed changes hands.

Low-lying neighborhoods in Woodbridge and Old Bridge will be targeted next in what has been an ambitious acceleration of Blue Acres, which had a budget of $60 million a year before Sandy. Cumberland County officials have also expressed interest in buyouts, while shore communities have not.

Borough administrator Fred Carr, who has been assisting the state with the local buyout program, said the idea was raised in December when frazzled flood victims asked for help during a meeting with federal and state disaster officials. 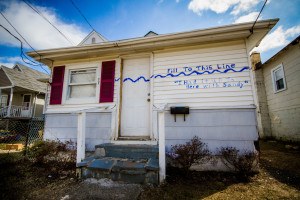 “Sandy was the deciding event,” he said, when residents finally realized that 20 years of talk about flood mitigation via a levee or dam was unlikely to become a reality.

It will be about a month before anyone in South River gets a buyout offer. The homes will need to be appraised. The offers will be for pre-storm market value and will take into account repairs made after the Oct. 29 storm.

As they wait for the process to unfold, Pat Smith chose not to plant flowers in her yard this spring, but Deltz is building a ramp for his 14-year-old dog, and Rasmussen is rebuilding her property with the help of volunteers.

Even those who are open to a buyout speak with regret about the prospect of leaving.

Deltz said he will listen to the government’s offer, but he has little incentive to move with his mortgage nearly paid off and his property taxes lower than many.

He missed a recent informational meeting attended by about 100 residents and was among the last to submit his buyout application.

“I don’t have high hopes for this,” Deltz said. “My heart tells me people aren’t going to get what they think they’re going to get.”