A Calvert County woman who survived a plunge off Maryland’s Chesapeake Bay Bridge after a crash says she decided she didn’t want to die and swam to safety.

Morgan Lake, 22, of Sunderland was on her way to visit friends and relatives in Philadelphia on Friday when her car was hit by a tractor trailer, according to the Maryland Transportation Authority Police. The car teetered on the wall for a time and then fell for what Lake said “felt like eternity.” 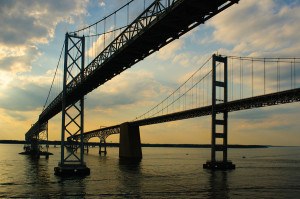 Once it landed in the bay, 40 feet below the bridge, water rushed into the car and Lake said she thought she was drowning.

Lake said that once she told herself that she could save her own life, she relaxed, unbuckled her seatbelt and swam out. She pushed off the car for momentum and rose to the surface and took a breath.

Lake swam to some rocks, where she climbed up and waited for help. Division Chief Keith Swindle of the Anne Arundel County Fire Department said a passing boater stayed with her until police and fire department boats arrived.

Lake was taken to the University of Maryland R Adams Cowley Shock Trauma Center and released the next day.

Lake, a student at the College of Southern Maryland student, she’s in pain, but she suffered only bumps and bruises.

Melani Lake credits her daughter’s “sheer will to survive.” She said she knew her daughter was an athlete, but “we didn’t know she could swim like that.”

Police say no charges have been filed, but a re-enactment of the crash will be staged Monday.

In 2010, Travel and Leisure magazine named the 4.3-mile span that connects the Eastern Shore to the rest of Maryland one of the scariest bridges in the world.

AAA Mid-Atlantic is calling for a federal investigation into the safety of barriers on the Chesapeake Bay Bridge after a crash sent a car off the bridge and into the water below last week.

In a letter to the National Transportation Safety Board on Monday, the motorclub called on the agency to investigate the crash.

In the letter, AAA Mid-Atlantic spokesman Lon Anderson says the crash raises questions about whether the bridge’s restraint system failed, whether it met federal specification or if those specifications may not be adequate for this kind of crash.

The Maryland Transportation Authority says engineers found no structural damage from this crash at the scene. Authority police and Maryland State Police are investigating the crash and the authority says it welcomes NTSB involvement and insight.