Every day, throngs of riders stand on the edge of danger in the nation’s busiest subway system, waiting on platforms with nothing between them and the tracks. 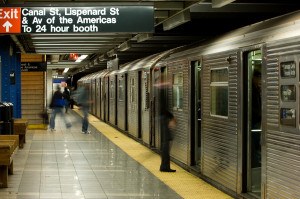 Dozens of subway and light rail systems around the world have safety barriers with sliding doors on their platforms, but the idea hasn’t gotten traction in New York. Yet transit officials are giving it a new look after two people were pushed and a third fell to their deaths on the tracks since early December.

Safety doors would be expensive and difficult additions to the sprawling, 108-year-old subway system, but some people are urging the Metropolitan Transportation Authority to try it. A company has proposed to install the barriers for free in exchange for advertising revenue.

Being shoved or bumped onto the tracks is “my biggest worry about New York,” said Ed David, a cinematographer who last spring launched an online petition to install the devices after reading about a college student who was hurled onto the tracks and killed by a train amid a fight at a Brooklyn subway station.

“I know that people like the roughness” of New York subways, said David, “but it’s a horrible way to die, and it can be prevented.”

About 140 people are hit by New York City subways per year, in situations such as accidental knocks and willful leaps. Fifty-five people died last year and 47 in 2011, according to the MTA.

The numbers are small compared to the 1.6 billion subway rides taken each year, and officials say a substantial proportion is suicides.

But two men were killed last month in a scenario out of an urban nightmare – each propelled into the path of an onrushing train by a mumbling stranger, in separate incidents. Then a stumbling woman fell onto the tracks and died when a train hit her early on New Year’s Day.

Subway systems from Shanghai to Dubai to Paris have installed safety doors over the last three decades.

Sometimes called platform screen doors or edge doors, the devices are generally transparent walls or barriers that run the length of a train platform, with doors or gates that align with the train’s doors.

They’ve been installed in more than 270 Tokyo stations and 530 throughout Japan since the early 1990s, according to the national Transport Ministry. Work continues on a 55-billion-yen, or $640 million, effort to install the doors throughout 29 stations that circle the city center.

Still, many stations don’t have them, and more than 600 people a year fling themselves to their deaths on the tracks.

A 1990s London subway line extension included safety doors at eight new stations, for climate-control and safety reasons. London’s transit authority says the cost of engineering the barriers into the rest of its 260 subway stations “would be quite prohibitive.”

In some places, the safety doors have presented some safety problems of their own. A man trying to get on a packed Shanghai train fell to the tracks and was killed when he became trapped between the subway and platform doors in 2007.

Some American transit agencies have eyed platform doors over the years, but the expense has led many to focus instead on simpler measures such as safety announcements, said Martin Schroeder, the chief engineer for the American Public Transportation Association, an advocacy group.

Still, there is some interest. The Federal Transit Administration is spending $275,000 to study platform doors and other ideas for minimizing passenger injuries. And some U.S. airport shuttle rails already have the barriers.

The less-than-20-year-old AirTrain systems at John F. Kennedy Airport in New York and nearby Newark Liberty Airport were built with the safety doors. No passengers ever have fallen onto the tracks, says the system’s operator, the Port Authority of New York and New Jersey.

Early plans for two New York City subway line extensions, now under construction, included platform doors. But the barriers were dropped from the plans to keep costs down.

The MTA made a general request for ideas on installing and financing platform doors in 2011 but hasn’t acted on it.

One suggestion, from architecture and engineering firm Crown Infrastructure Solutions: It would pay to build the structures, at an estimated $1 million per station for 468 stations, and recoup the cost from advertising on built-in screens.

“What we found is the solution to a very relevant problem, and we found a way to off-set the costs,” Vice President Anthony R. Milano said this week. Besides protecting people on the platform, the barriers would help keep litter off the tracks, potentially reducing track fires, he said.

The challenges would be considerable, the MTA says. The subway system has widely varying architecture, not to mention different types of trains.

“But in light of recent tragic events, we will consider the options for testing such equipment on a limited basis,” the MTA said in a statement this week.

The MTA said acting Director Thomas Prendergast wouldn’t comment before a committee discusses the deaths at a meeting this month.

Some people have blasted the safety barrier idea as profligate, unnecessary – and perhaps most damning of all, just not New York. A 2011 editorial in the Daily News dismissed the idea as “adding a touch of Disney World to New York’s underground lair.”

Indeed, the cinematographer David’s online petition for barriers in New York has hardly gone viral, garnering about 75 signatures as of this week.

To riders’ advocate Gene Russianoff of the Straphangers Campaign, the barriers might be useful in some places but seem unrealistic as a systemwide effort.

Mayor Michael Bloomberg, who makes a point of letting New Yorkers know he takes the subway to work, said after the second pushing death that people need not “sit there and worry every day about getting pushed over the platform.”

“It is such a rare occurrence that no matter how tragic it is, it shouldn’t change our lifestyle,” he said. “We do live in a world where our subway platforms are open, and that’s not going to change.”