A new high-resolution climate study by University of Massachusetts Amherst climate scientists, the first to apply regional climate models to examine likely near-term changes in temperature and precipitation across the Northeast United States, suggests temperatures are going to be significantly warmer in all seasons in the next 30 years, especially in winter. Also, they project that winters will be wetter, with more rain likely than snow.

Writing in the current issue of the Journal of Geophysical Research, Michael Rawlins and Raymond Bradley of the Climate System Research Center at UMass Amherst, with Henry Diaz of the National Oceanic and Atmospheric Administration’s (NOAA) Climate Diagnostics Center, Boulder, Colo., provide the highest resolution climate projections to date for the Northeast from Pennsylvania to Maine for the period 2041 to 2070. The study used data from multiple climate model simulations run at greatly improved resolution.

Rawlins says, “One of the most important aspects of our study is that we can now examine in more detail what’s likely to occur across the region with a grid size of approximately 31 x 31 miles (50 x 50 km). Previous studies used much more coarse-scale general circulation model data. This represents a significant step forward.”

Bradley adds, “Regional climate models have been around for a while, but they have not been applied specifically to the Northeast region. At this point what we can provide are ‘broad brush’ estimates of how things will change over the next 30 to 50 years. People should not over-interpret these results. Further research is needed to scale these down to individual locations. But for natural resource conservation managers, water resource managers and others responsible for planning ahead, we expect our region-specific results will be helpful.”

Overall, the researchers say the region is projected to warm by some 2 to 3 degrees Celsius by mid-century, with local changes approaching 3.5 degrees C in winter. Precipitation will go up as well, particularly in winter, but again not uniformly across the Northeast. The UMass Amherst climate scientists say confidence in the precipitation change projections for spring, summer and autumn is lower, given smaller changes relative to natural weather variability. 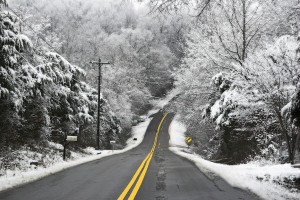 “The only clear signal of change for precipitation is noted in winter, which appears to be heading toward wetter conditions, consistent with current trends,” Rawlins says. Winter precipitation is projected to rise significantly above natural weather variability, around 12 to 15 percent greater from southwest Pennsylvania to northern Maine, with the exception of coastal areas, where projected increases are lower.

“But we shouldn’t expect more total seasonal snowfall,” he adds. “Combined with the model-projected temperature trends, much of the increase will occur as rain. We’re losing the snow season. It is contracting, with more rain in early and late winter.”

For this study funded by NOAA, Rawlins and Bradley used available outputs from an ensemble of regional climate models (RCM) from the North American Regional Climate Change Assessment Program to look at potential changes in seasonal air temperature and precipitation between the present (1971 to 2000), and a future period (2041 to 2070) across the Northeast. They performed a rigorous evaluation of each model’s ability to represent current climate by comparing its outputs to actual weather station data.

The projections assume that greenhouse gas emissions will continue to rise, increasing atmospheric CO2 from about 400 parts per million (ppm) today to between 500 and 600 ppm in 2070. Bradley and Rawlins acknowledge that this outlook represents the “most aggressive, most troubling higher emissions trajectory scenario” for CO2 levels, but they point out that so far there is little evidence that society will act to appreciably change the current rate of increase.

Each of the five RCMs were forced with data from two general circulation models (GCM), yielding nine GCM-RCM simulations. This provided a rich suite of data for climate change analysis, the scientists say. GCM forcings are applied at the boundaries of the North American region, with RCMs then taking over, resulting in much higher-resolution depictions of precipitation and air temperature than would have been possible using the GCMs alone.

Results show statistically significant increases in air temperature region-wide for every grid in each season, but the changes are not uniform. For example, the models collectively project air temperature changes in winter of more than 3 degrees C (5.5 degrees F) across northern Maine, all of New Hampshire, Vermont and the Adirondacks, representing about 50 percent of the Northeast region. In some local areas, the increase could be near 4 degrees C (7.2 degrees F).

By contrast, winter air temperature increases in southwest Pennsylvania are projected to be lower, only about 2.4 degrees C. In summer, the pattern is reversed and the southwest quadrant of the northeast is projected to be warmer and the changes higher.