The distinctive red soles of Christian Louboutin shoes are entitled to trademark protection, even if the company can’t exactly call the color its own, a federal appeals court said Wednesday. 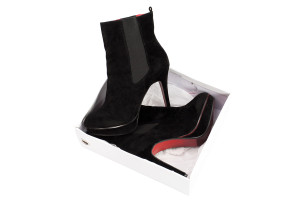 The 2nd U.S. Circuit Court of Appeals in Manhattan reversed a lower court judge who had ruled against the French maker of luxury shoes worn by stars such as Sarah Jessica Parker, Scarlett Johansson and Halle Berry.

The appeals court said Louboutin was entitled to protect its brand against red-soled shoes made by competitor Yves Saint Laurent S.A.S., which is also based in Paris, though it instructed the U.S. Patent and Trademark Office to limit registration of the trademark to situations in which the red lacquered outsole contrasts in color with the adjoining upper part of the shoe.

In 2008, the trademark office granted protection to Louboutin, which has applied glossy vivid red to the outsoles of women’s shoes since 1992. The shoes sell for up to $1,000 a pair.

U.S. District Judge Victor Marrero went too far in August 2011 when he ruled that a single color can never serve as a trademark in the fashion industry, the appeals court said.

It said Louboutin’s bright red outsole had acquired limited secondary meaning as a distinctive symbol that identifies the Louboutin brand, and it credited some of the judge’s findings about Louboutin’s successful efforts to market the distinctive look to support its conclusion. It noted that the U.S. Bureau of Customs and Border Protection had recently seized over 20,000 counterfeit Louboutin shoes illegally shipped to the United States.

Still, the appeals court said it was limiting the trademark “to uses in which the red outsole contrasts with the color of the rest of the shoe.” It noted, for instance, that Yves Saint Laurent’s use of a red outsole on monochromatic red shoes does not infringe on Louboutin’s trademark.

“It is the contrast between the sole and the upper that causes the sole to ‘pop,’ and to distinguish its creator,” the appeals court wrote.

A Louboutin lawyer, Harley Lewin, said: “Louboutin is enormously pleased that its central arguments, that indeed a single color can and does serve as a trademark in the fashion industry and perhaps even more importantly, that its Red Sole trademark is valid and enforceable and will remain so, have been confirmed as correct.”

Attorney David H. Bernstein for Yves Saint Laurent praised the ruling as “a total victory for us,” since the company will be able to continue making all-red shoes.

“They brought this case to stop us from making these shoes and they lost,” he said. “Our client has the right to continue to do what it has always done.”

In a statement, Yves Saint Laurent rejected Louboutin’s claims that it was trying to imitate its competitor’s color scheme, saying it was “a venerated fashion house with the utmost in creative talent and has no need to trade on the goodwill of other brands.” It said it has featured red and other colored outsoles since the 1970s.

The appeals court found support for its reasoning in a 1985 appeals ruling in favor of a fiberglass manufacturer who sought a trademark on the pink color of its residential insulation material and in a 1995 Supreme Court decision protecting the green-gold color of a dry cleaning press pad. In that ruling, the Supreme Court concluded that “color alone, at least sometimes, can meet the basic legal requirements for use as a trademark. It can act as a symbol that distinguishes a firm’s goods and identifies their source, without serving any other significant function.”