The Washington Monument did not sink any further into the ground as a result of last year’s 5.8-magnitude earthquake, government surveyors said in a report released Tuesday. 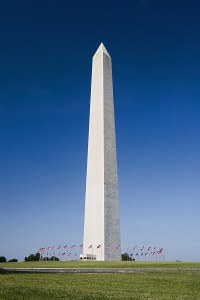 The upper portion of the monument sustained several large cracks during the quake on Aug. 23, 2011, and the iconic obelisk will likely be closed for repairs until 2014. The repairs, estimated to cost at least $15 million, will require a massive scaffolding to be built around the 555-foot monument.

The monument was built on land that used to be underwater and has sunk about 2.2 inches since 1901. Surveyors expected at least some modest settling as a result of the earthquake, but in a report released Tuesday, the National Geodetic Survey said the quake had made no discernible difference.

Dave Doyle, the project manager for the survey, said he was surprised and pleased by its findings.

“We’re talking about a rather huge object – 90,000 tons,” Doyle said. “It sits on a base that is constructed mainly of sand and gravel and clay. With a 5.8-magnitude earthquake, you sort of thought that there might be a little bit of motion.”

Doyle said the lack of settling was a credit to the engineers who shored up the monument’s foundation in the 1880s. The monument was completed in 1884 and was the world’s tallest structure until 1889, when the Eiffel Tower was built. It remains the tallest structure in the nation’s capital, which has restrictions on building heights.

“If there was any movement, it was at the sub-millimeter level, and that’s just not reasonably detectable,” Doyle said.

The NGS has also recommended using global-positioning technology to determine whether the earthquake caused the monument to tilt, although there is no evidence to suggest it did. That work would be done while the monument is covered in scaffolding.

Most of the National Mall was created with soil dredged from the Potomac River. That’s one reason why the structures on the mall are prone to settling in the ground, leading to problems that required major renovations of the Jefferson Memorial plaza and the reflecting pool in front of the Lincoln Memorial.

The monument was one of a few buildings in Washington to sustain significant damage from the rare earthquake. The National Cathedral was also damaged.

Besides the cracks, the quake caused chunks of stone to be shaken loose on the interior and exterior of the monument. Visitors were inside the monument when the earthquake struck and fled down the stairs. No one was seriously injured.

The monument has been closed to visitors ever since. It normally gets about 700,000 visitors a year who take turns riding an elevator or climbing stairs to the top.