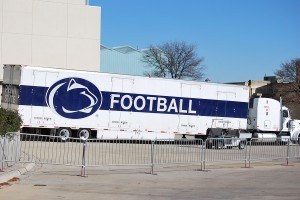 The company filed suit last week in federal court in Williamsport. A similar lawsuit has been filed by the insurer for The Second Mile charity Sandusky founded for at-risk youth in 1977.

State Farm began insuring the home in 1985 for Sandusky and his wife, Dottie, according to the complaint filed by the Bloomington, Ill.-based company. The company said it also refused to provide coverage for Sandusky’s criminal defense.

Lawyer Ralph Bocchino is defending Sandusky in a lawsuit filed in Philadelphia by an accuser who said he was molested at Sandusky’s home, on Penn State’s campus and elsewhere from 1992 to 1996. The accuser is not one of the 10 trial victims.

Bocchino declined comment Monday on the State Farm complaint because he said it was not yet clear if he would be involved in it.

Federal Insurance Co., which represents the charity, argued in its complaint that Sandusky’s conduct did not involve his position as an executive or employee of The Second Mile.

In addition, “Pennsylvania courts have found that a person who sexually abuses a minor should not expect his insurer to cover his misconduct, particularly where the average insured purchasing insurance would cringe at the very suggestion that he was paying for coverage arising out of sexual abuse of a child,” lawyers for the New Jersey-based company wrote in the December complaint.

The State Farm complaint has been assigned to U.S. District Judge Yvette Kane.

Many of Sandusky’s trial victims, along with other potential accusers, are expected to file civil suits seeking damages.