Penn State University could face years of litigation over Jerry Sandusky’s abuse of children, but the school is also doing some things that may limit the damage, according to lawyers with experience in such cases. 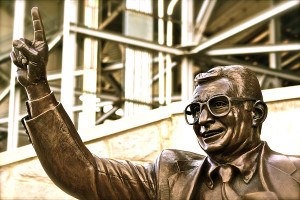 But the very fact the school supported and paid for such a hard-hitting report could help convince the victims that Penn State has changed its ways, said Max Kennerly, a Philadelphia attorney who thinks settlements could range from $1 million to $10 million per victim.

Kennerly said the biggest trial verdicts often come when a company or institution refuses to accept responsibility for past actions. He said that while the Freeh report raises serious questions about the behavior of past administrators, the school has been much more proactive since Sandusky was indicted.

But Kennerly said suggestions that Penn State could face costs of more than $100 million seem exaggerated, since there’s a good deal of information on how much the Catholic Church has paid to settle more than 5,000 abuse claims.

According to BishopAccountability.com, which tracks the scandal, the most any single victim has gotten is $3.4 million, and only about 50 people have received more than $1 million. The largest single case, in Los Angeles, paid 508 victims an average of $780,000 each, and in some cases victims received as little as $27,000 each.

But Kennerly said the possibility of punitive damages is the “wild card” in the Sandusky case, which in the worst possible view suggests “four separate employees of Penn State who are intentionally covering up child abuse.”

Serbin said that in one early church abuse lawsuit that he started in 1987, a jury ultimately found that church leaders had a greater degree of fault than the priest “who had been molesting kids for 19 years.”

“The reason is those people had an opportunity to stop the predator,” he said of church leaders, just as the Penn state administrators did.

Serbin added that the school doesn’t have a full picture yet of the total number of victims who might sue, so it’s hard to guess at total liability.

Moody’s, the credit firm, said last week that it hasn’t changed Penn State’s rating, but has added a negative long-term outlook because of uncertainty over abuse lawsuits.

“We expect that the university will likely be able to absorb the impact of the civil suits and settlement of the known claims in the near-term, given its still strong market demand, positive cash flow and financial resources exceeding $5 billion,” Moody’s said in a statement. “However, with the release of the Freeh report and its harsh criticism of both the board of trustees and senior leadership, Penn State faces greater uncertainty regarding the emergence of both future legal actions and financial claims against the university.”

The school’s primary general liability insurer, the Pennsylvania Manufacturers’ Association Insurance Co., has sued Penn State over PMA’s responsibility to cover potential damages from one of the claims. Penn State has countersued.