The lifeguards had gone home, but the sun was still strong, the temperature was still high and the three 17-year-olds from northwestern New Jersey still wanted to swim.

So Craig Szot, Michelle Hennelly and Kevin Reidinger ran into the surf, splashing one another, mugging in goofy poses and chasing one another in the shallow waves, just beyond a tipped-over lifeguard chair that read, “No Swimming, Lifeguard Off Duty.” 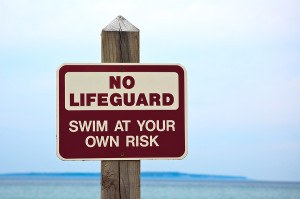 It was about a week after the bodies of two victims were recovered at the Jersey shore, the last of five drowning victims so far this year. They ranged from a 10-year-old swimming with his family in Atlantic City to a 24-year-old Kenyan who died as four others he was swimming with were rescued from a rip current in Bradley Beach.

Authorities say all five deaths had one thing in common: They occurred when no lifeguards were on duty.

But at the unguarded Long Branch beach, the three teens from Long Valley were unconcerned.

“I’m not worried,” Szot said. “I think I have enough swimming experience to be OK.”

“I don’t think anything bad will happen to us,” Reidinger added.

After-hours drownings have long been a problem at the Jersey shore, but the situation is particularly bad so far this year. Lifeguards and shore mayors agree there are no easy or cheap solutions.

Joe Bongiovanni, Asbury Park’s beach safety supervisor, says people will keep dying at the shore without some serious deterrents. He wants New Jersey to pass a law imposing stiff fines for anyone caught swimming after lifeguards have gone home. He made the suggestion the day authorities recovered the body of Chazmin Mills of Irvington, who vanished in the surf as his younger sister was saved by rescuers who had raced back to the beach shortly after it had closed for the day.

“We fine people for talking on their cellphones while driving or texting while driving for their own good,” Bongiovanni said. “This is something else we should be doing. Let them know it is breaking the law, with a hefty fine, and the word will get around.”

There are several reasons people venture into the waves in the evening. In some instances, the weather remained scorchingly hot even after dinner, and people were seeking relief.

Another reason is to avoid beach badge fees of $5 to $8 at many New Jersey beaches. This is particularly the case with low-income families or individuals, as well as immigrants who might not speak or read English.

“Why do people go on after 5 o’clock? Because it’s free,” Bongiovanni said. “But a big part of the reason you’re paying that fee is for the protection it provides. The major expense we have from our beach operation is for the salaries of the staff.”

His proposed law would make it illegal to swim at an unguarded beach between May 1 and Oct. 1, with an exception made for surfers.

A surfing advocacy group proposes letting surfers take to the water anywhere along the coast after lifeguards have gone home, saying the boarders have ready-made floatation devices that can be used in an amateur rescue until professional help arrives.

Rip currents are suspected of contributing to several of this year’s deaths. The sudden, strong flows of water away from the beach and out to sea, caused by a combination of the ocean floor topography, winds and tides, can carry even strong swimmers far from shore in seconds. The key is trying to swim sideways, parallel to the shore, until you’re out of the rip current’s grip, then swim toward shore.

“The waves are stronger in the afternoon,” he said. “It puts more water up against the shore, which can cause rips or make them stronger.”

Most shore towns say they simply don’t have the resources to patrol the beaches in the off-hours.

“It’s always a budgetary concern,” said Scott Wahl, a spokesman for Avalon in Cape May County. “It’s impractical to provide 24-hour-a-day, seven-day-a-week surveillance of your beachfront.”

Fearing lawsuits for after-hours mishaps, Avalon got a court to overturn many of the beach access rules.

Most shore towns post notices at the entrances to beaches warning that swimming is prohibited when lifeguards are off-duty and that people who enter the water do so at their own risk. Many even paint it on lifeguard chairs.