A fire on a tourist-friendly New York City pier that sent a huge cloud of smoke billowing above the Manhattan skyline was doused without any injuries on Saturday, fire officials said. 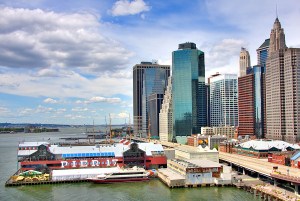 Flames enveloped a 100-foot stretch of Pier 17 at South Street Seaport, which was teeming with hundreds of people when the fire broke out about 4 p.m. Officials for the Fire Department of New York said the blaze was burning beneath the pier on the East River.

“You could hear the wood crackling. It was very hot,” said Sean James, who works as a deckhand on a tourist speed boat and saw the fire break out. “It was spreading fast.”

A music festival was under way not far from where the fire broke out but resumed after the blaze was brought under control. None of the shops and restaurants along the pier was damaged and the fire did not affect the shopping pavilion, also called Pier 17, that is slated for renovation.

When James and his fellow crew members spotted the fire they sped over to the pier and began drenching the flames with the fire hose on their boat until the fire department showed up. Firefighters had to contend with heavy smoke and limited visibility.

“It could have been a disaster,” said FDNY spokesman Jim Long.

The large plume of smoke that rose over the river could be seen from Brooklyn and farther uptown to Manhattan.

Thirty-three units responded with about 140 firefighters, who had the fire under control in less than an hour. The cause was not immediately known.

The FDNY’s marine unit worked from the water while other firefighters used chain saws to cut through old planks of timber on the pier, then crawl through a 5-foot space between the deck and concrete to get to the flames.

Battalion Chief John Sarrocco said investigators are checking to ensure that the stability of the pier was not compromised. Sections are made of old, thick timber and burn easily, he said.

The Seaport’s shops and restaurants are a popular spot on the river, especially during the summer months. The pier was reopened to visitors Saturday evening, although the section affected by the fire remained cordoned off.

The shopping pavilion, a rustic red wooden building, was built in 1985 and is slated for an extensive renovation to begin in 2013. A proposal calls for the building to be transformed into a three-story glass structure.

The pier is part of the South Street Seaport Historic Landmark District. The city must sign off on the renovation plans.